What a joke of a card. I've been using his in form for a while (I had about 250 games on him), and this version is way way better than him. His passing is still really, really good, just as good as Bale's whom i use as LAM (Alessandrini as RAM). His dribbling is exceptional. the way he's controlling the ball and running with it near his feet. Shooting is just as good as his IF, maybe shots are even more powerful.

I think that these FUTMAS cards are just powerful. All players I have, Herrera, Fabinho, Alessandrini, Van Dijk, are monsters, worth every penny. 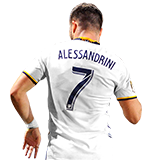 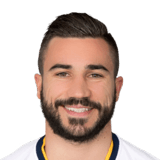 I am a D1 player, top 100 squad battler, and gold 1/elite 3 finisher in the weekend league, and I am telling you right now that Alessandrini is just as good as Lionel Messi. Fortunately for me, I packed Alessandrini in one of my monthly FUT champs reward packs. I have played around 350 games with him, mainly as a starter but he is my primary super sub in my new team. I bought Messi 2 weeks ago and I can honestly say I pr...
Read full review

Romain Alessandrini does it all. He's fast, he's strong, he's tireless, he's clinical, he's a key passmaker and he's a dribbling god.To sum it all up: romain alessandrini is perfect in this form.For the price I've paid on this (20k for an ashley cole) it's a bargain. 87 is a little bit higher, but if you've been playing futties, you most likely has a lot of high-rated cheap TOTS players around (used...
Read full review

If you consider buying Alessandrini, go get him he is amazing. personally i think he is better than Dembele and he is a lot cheaper. he is around half of the price. He is so fast and his finishing is amazing even with his weakfoot.I played with him in division 5 and 6. and Fut champ qualifire.
Read full review
0
/600
Update my avatar Dos and don'ts
Top Rated
New
Controversial
Show comments