Hes quality left back, much better than his normal card in my opinion. I totally hated his normal card, but i have played with this one already 116 games.

One thing i really like in this card is his work rates. Many full back has H / M work rate, but Rose has M / H work rate what makes him to focus on defending more. And decent defending, physical and ok pace after you put him Shadow what boosts Rose's pace up to 94 (first i didn't believe in this +10 boost thing at all, but year ago EA explained totally how the chemistry works so then i started to believe in this).

But big minuses is his passing and hes pretty shit at air so when you play against some tall wingers like Bale you are really screwed. And by big minus in passing i precisely mean his long passing and his short passing. He has really decent crosses but i hardly ever cross so that's not the main thing i'm looking for. I usually like to either switch side or play long through ball to striker and you can't simply do that at Rose.

Rose is just like bad marriage, you want to break up with the chick, but you choose to stay for the kid's, who is in this case Rose's work rates and defense skills. And the chick in this case is Rose's passing ability, height and pace.

So he is alright card, probably the best choice available in Premier League. But if you have chance to go for like Alex Telles (his SIF by far best card i've ever used), or Alex Sandro or Alba, go for them. But in case you don't, Rose is safe choice too. Or if you just look the one full back who can really defend well and don't expect him doing much forward, this is the guy for you.

But i don't complain as the sbc only costed me about 30-40k to do. And i don't use him anymore because i want my full backs to be able to pass the ball well so i bought SIF Telles now, but i use him as super sub and if i'm leading and want to secure my lead i put Rose on.

Pace (you have to use Shadow chem style or someone else which boosts pace by 3+ to be able to play with him, when i usually like to use Anchor to give that nice boost to strength & jumping)

Finishing (Hardly ever take a shot for him but daamn when i did, it was shockingly bad) 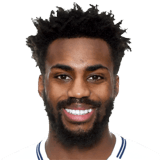 2018 and still the best LB in Premier League

From the beginning of FIFA 18, Left Back has been the position I have made the biggest research for the best possible player. Every list of players I find in the forums is either not even mentioning this guy's name or describe him as "not bad".From my experience out of more than 400 games with him protecting my left side, he is a Top5 at least LB in the game this year. And let me explain myself.I have u...
Read full review

Even better Upgrade to is normal card

Honestly this card comparing to is normal one, it feels soo much better i might even be tempted to try out the Mytical Icon Roberto Carlos, he defends quite well and with a shadow card pace isnt a problem form him.Even when he shots it's almost a goal.
Read full review

Someone refund my 92k please

Quite possibly the worst card I've ever used in FIFA over the years. If you send a through ball down his side he's either on the ground injured or nowhere close to being in position and doesn't have the pace to catch up like Kyle Walker on my opposite flank. Countless times I've thrown it to him to start a counter or clear it and he takes a heavy touch or passes it to the wrong player and I concede. Extremely close to movin...
Read full review
0
/600
Update my avatar Dos and don'ts
Top Rated
New
Controversial
Show comments