At first, I didn't understand why this card is worth 200 K because lots of his stats are pieces of craps. But I had some spare money and decided to try it on. He was SURPRISINGLY god damn good in the game. Although he only has 68 strength and 77 balance, he acts like a piece of hard rock in the game, probably because of his huge model. The most shiny point of this card is his positioning. With 99 positioning after adding chemistry, he gets to the right position on his own, and waits for passes in the exact position that can assure a goal. This is astounding because everytime he is at the place where there is no defenders. As a result, he doesn't even need super speed or super stength or even skill moves to get rid of the defending line. When I get pass thru to him, he can always get his job done. I feel like as a CAM, he is way better than James Rodriguez for Bundesliga team. Although he can't score some astonishing long shots like James, he is always at the right position in front of the goalkeeper waiting to score, just like a thief or a proacher. His high/high workrate is also helpful because sometimes he can be an extra hand to defend, which is nothing bad. He is such a good card and you guys should definitely check him out! You won't regret. 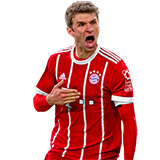 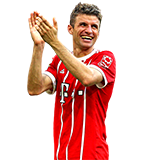 Got him untradeable from Bundesliga TOTS and he's the best striker i've used so far.Low driven, long shot, headers, he scores them all. He outruns the defenders and can also pass the ball, then go for a run and score.The positioning at corner kicks is also very good, scored some last minute corner kicks with him.He turned around some games by himself.I played with 93 Kane for some time but this M...
Read full review 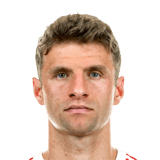 The Most Underrated 86 Card

Why is it, that Muller always gets shunned? Everyone i hear says he is the worst high rated player. Why? Because you cant be a pace whore with him? I just can't understand and now i am here to shed some light on why this card is 86 rated! Important note! This review is based on a Müller, used with Hawk chem style! All the s...
Read full review

I used to run the above squad with a trio of TOTS Gomez, PTG Icardi and Dybala which was alright but just didn't suit my play style. Went on to do the Bundesliga Guaranteed TOTS and packed Lewandowski.With a 97 rated untradeable player packed, I just had to build a team around him. This then prompted me to sell my TOTS Ramos to fund the purchase of TOTS Muller and TOTS Werner. This front three is devastati...
Read full review
0
/600
Update my avatar Dos and don'ts
Top Rated
New
Controversial
Show comments