As a munich fan it was my obligation to buy him instantly when he got released and I havent regret it in the slightest. This review is based on his 84 rated card with shadow applied. He is one of the best allrounders I played and I used him in over 850+ matches already. Always as a CM (always with "stay back while attacking") or CDM and he works brilliant at both positions. His defending and shootingskills (even with his left 3* foot) are way better than the card stats would suggest. Even his low height (181 cm) isnt much of a problem thanks to his 90 Jumping. He scored a lot headers for me and even against tall strikers like Lukaku he doesnt have problems to win them. There are only two things I disliked, his passing and 3* skillmoves. He has really good passingstats but somehow he sometimes passes the ball directly to the opponent without a reason. Maybe its because of his curve, im not really sure here. But considering his price he is totally worth it, even underpriced in my opinion. He scores a lot goals in reallife, he just showed it with his screamer against Freiburg again so I am sure he will get at least one more IF sooner or later. 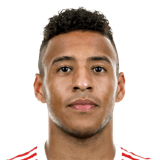 He's so good. Win tackles, win headers every time, scores a lot of goals..... what else to say? what a beast !!! He is by far the best CM I have used in FIFA 18. He's really worth the money and will come in more upgrades that's for sure :) He plays so good for Bayern in real life.
Read full review

one of the best cm's

I use tolisso as an outside cm in the 4-3-2-1 or as a cdm or outside cm in a 4-1-2-1-2(2). He is one of my favorite players in my team. Pair him with leon goretzka in midfield and you get one of yhe strongest midfield pairings in the game imo.He is strong, pacey and good at creating chances and starting the build up play. He can score too. I have used his IF in draft and I can say that if you have the coins then I would rec...
Read full review

I used him in a 4321 as my left CM.He is one of the best box to box CMs for that money in my opinion.He also better than Vidal in my opinion.If you have got Alaba and Boateng use Tolisso as your CM not Vidal.
Read full review
0
/600
Update my avatar Dos and don'ts
Top Rated
New
Controversial
Show comments