This is my first review, so that should speak volumes to how fantastic this card really is.

First off, I packed this card yesterday in the BPL tots sbc, and oh my boys, I dont think I could have gotten any luckier!!

This guy is unreal (as you would suggest from his price)

HIs main strengths are his shooting, passing, and dribbling (Exactly what you need from the CAM spot)

Another thing about this card that is incredible is that he also has 87 strength so he can absolutely hold his own against most of the good CB's and CDM's in the game.

5 Star Weak Foot & 4 Star Skills, what more can you ask for with this masterpiece??!

Trust me he can put the ball in the back of the net from nearly anywhere on the pitch, with either boot.

His build up play, and one-two's back and forth with other attackers rival that of any other card in the game.

Now about his speed, Its honestly great, I cant complain. He seems quite rapid in game (use ENGINE chem style)

Matching it, with with all of his other attributes, he's nearly unstoppable.

STAMINA 99!!!! When you have a player such as this one, who is gonna be running up and down all game long due to his High/High workrates, its so refreshing that he can last all game, even through to the 120 mark.

His Attack Positioning and finishing are that of World Class strikers, he's 99.9% always in the right place a the right time.

De Bruyne's reactions (first touch) is impeccable. He literally might have one of the best touches in the game.

Play him at CAM! it would be an absolute injustice to play this card anywhere else. Maybe CM, maybe. if your team already has a fantastic CAM.

There's not really more that I can say about this card, he is just and absolute delight. I can't think of a single con that this card possesses.

I have used his 89 card, and I cant confidently say that this TOTS card is leaps and bounds better than even the 91. Likely much better than his BPL 94 SBC, (6 more pace, 6 more shot, 3 more passing, 9 more physicality.)

All games that I played with him so far have been Division 2 or Fut Champs.

This card will boost the game play of any team that you put him into. I've been playing extraordinarily well ever since he joined my club. He literally elevates everyone around him.

-Shots of every kind: low drivens, finesse, regular power shots, LONG SHOTS, it doesn't matter he is unbelievable at all of them.

Maybe price but I got him in the SBC 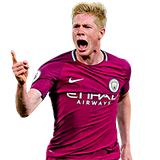 The best CAM in FIFA!

I just packed him in Squad Battle elite 3 gifts. And i just have to say that he's the best CAM in the game...Pace:It doesn't feel too quick, but actually it's really OK. His aceleration is really goodShot:It's really amazing, powerfull and precise just press b and it's goalPasses:Just insane, really fake passesPhysicality: 99...
Read full review 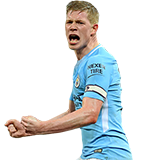 Say hi to KDB from other galaxy

I was undecided to complete this sbc before tots event but im heavily glad i did. I can easily say this version of KDB is freaking beast in game. Im not a fan of online division cause i cant get enough time to play enough. But hes absolutely fantastic for Squad Battle if you are trying to play on legendary. Hes definitely saving you on the pitch. I landed him as RCM and hes doing great job. It costed around 400K for me and ...
Read full review 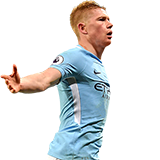 KDB toty is a sensational card! As nearly everything is perfect about him, I use a shadow card on him. Its so hard to get the ball of him not just because of his ball control and dribbling, but his strength makes it hard for even world class defenders to push him off the ball. I play him with Rui Costa and 1-2 s between them make opponents rage quit. I have used Ronaldo 96 and he would score at least 2 goals and change the ...
Read full review
0
/600
Update my avatar Dos and don'ts
Top Rated
New
Controversial
Show comments