First of all, I'm fan of Chelsea so I bought him immediately after he's on market. I'm writing to argue with some hidden traits you might wanna know before use him in your primary squad. Compare Giroud's data with 88 Harry Kane, you can see Giroud is way better than Kane EXCEPT in pace, BUT is just this pace can make a big difference. I don't know why but there must be some links b/w pace and shooting and passing, I use a pace booster chem and make TOTS sterling/IF Tadic(highly recommend, he's so OP) and now it might seem Okay to use Giroud as a traditional England centre, however you're wrong. After sufficient games I've played, I've found Giroud is lack of some shooting and passing agility which is not showed in 'Agility' option, like turning around, dribble stopping, actually he's not a solid centre when we want a centre that can organize with wings, and his long shooting and horizontal turns are limited since his agility. Same difficulty, same squad, similar opponents, his performance is worse than 88 Harry Kane. If you have a two-striker squad pair with like TOTS Firmino, Aguero etc it would be fine, but as a solo centre striker, I suggest a 88 Kane or Diego Costa.

Mid-Short shoot. Long shoot if it's a cut-in.

And everything associated with that, eg. shoot alongside defender, long shoots, passing and dribbling. 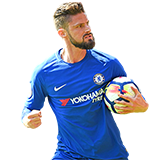 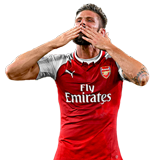 Olivier Giroud. Where to start? Most magnificent beard in professional football? Check. Sexiest man in professional football? Check.Puskas award for an insane goal? Check.Cheapest icon in FIFA 18? Check. He's ticking all the boxes. Used him in 20 games so far and boy is he something. I've mostly played him as a CF behind Mbappé in a 4-4-1-1 with Martial and Ousmane Dembélé on...
Read full review 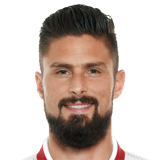 I treid pretty much every single Giroud card this year.Everyone who tried is aware of what kind of player it is.He kills it with his left foot every single time, scores from every distance, wins every header and simply cannot be pushed off the ball by any player, the only way to take the ball when he is shielding properly is to foul him. On this 94 version he also feels magnificent on the ball...
Read full review
0
/600
Update my avatar Dos and don'ts
Top Rated
New
Controversial
Show comments