i was looking at completing this sbc since it came out and i finally decided to complete it. What a good choice it was. For 70k this is a steal for a card like this. He is a better version of patrick vieira (baby version). He feels so good on the ball, he can thread through passes better than vieira can, he intercepts the ball and is always in the right position defensively. What i enjoy about this card more than patrick vieira is the 4* weak foot, he can pass with his left or right, also how great he feels on the ball compared to vieira. What i have noticed differently with this card compared to vieira is how he contributes to the build up play, from the middle of the pitch he helps push the ball forward with good runs but he does not push up to far when in the final third so he can drop back to defense when its needed. I used anchor on him, it would probably be the best chem style for him because it ups his pace and makes his defensive stats crazy with upping his aggression, strength and jumping. I don't think a shadow is worth it because it doesn't change the pace of the card that much and it doesn't upgrade with physicality stats. 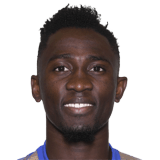