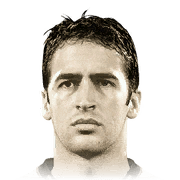 He is totally worth for every penny spent . You can feel the "Prime" in this card . Pace , Dribble , Shot is way above the stats mentioned . He can score with any foot and any shot ( Long range thunderbolt, Finnes inside and outside the box , low driven , Bazooka from middle of the pitch ). Bout him for 1.65 mil and used in weekend league 12 matches played 21 goals 9 assist . He was there to save me in many of the crucial games where I was loosing games by a goal margin where his Prime role gets activated at 70th minute and turns into a goal scoring machine and I won scoring 2-3 goals ahead of the opponents . I used him in narrow formation with two ST where I paired him with Aubameyang . Lethal Duo in game. Their Dribbling and pace shreds the defenders . Worth a buy!! Please get him while he is in 2mil price range .

IMO - I can easily say this card is close to last years prime R9 .

Where to begin? Well as an opening statement I would like to say, how is this guy not considered to be one to the top tier icons?!?

I picked up Raul on the recommendation of a friend who explained that he had just been sexually assaulted by him in game. Paraphrasing of course. So after having just sold Prime Crespo and having had 400k sat in the bank anyway I decided to purchase Raul. I started out cautious as I don't particularly like having such an expensive player in a team because I tend to think you end up only playing through them. Due to his pricetag I was expecting big things and boy did he deliver. His first game in Champs and he scored a hat trick inside 7 in game minutes. At this point, I was in awe of his ability but thought this is just like Fifa to have a player start amazing and then fade off for you after 13/20 games. This did not happen. I can tell you now that Raul in my team has notched 83 times in a unbelievable 34 games. To put in perspective. That a GPG ratio of around 2.5. Which translates to almost a hat trick per game. As you can understand I continue to use him now and he is just unplayable at times. for instance in two games he recored 14 goals.. 8 in one and 6 in another. This is in the current active FUTCHAMPS.

+ His finishing is the best I've ever seen on any card - You don't blame raul for missing you blame yourself for too much power.

+ He genuinely feels quick in a game where every fast players feel slow.

+ His dribbling is unbelievable he's able to destroy defenders Left,Right and Centre.

+ His heading is an absolute joke. 96 heading accuracy and 91 jumping do not lie and 5ft 11 is plenty tall enough.

+ Passing. Card stats lie, on the face of it Raul has 82 passing which is meh. but actually hidden away is the fact that he has 94 vision and 88 short passing meaning he links the play brilliantly.

+ 88 Stamina means he actually lasts all game which is a rare thing for an icon.

Since the beginning of Fifa I've been wanting to do an Icon SBC of a ST.. and after looking at all the choices, I thought its gonna be either him or Butragueno as both looked very good.. When his SBC dropped I immediately did the loan to try him out and after having 20 games with him I can defo say he's on of the best STs I've ever played with so lets get to the review.