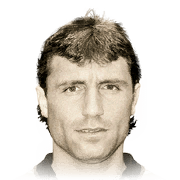 Before i use the middle icon Hristo Stoichkov, i used the base version of him. The 87 Stoichkov is already good, i mean he's great! He's scored so much for my team and the goal ratio is always 1 per game. The magic is same when i use the mid version. I spent 600k-ish of coins to brought him to my team. I use him as a striker in 4-2-3-1 (1) formation. The pros from him is his shooting. Jus try shooting from anywhere, 8 out of 10 it will scored. I'm not kidding, his shoot is so good, i mean he done the job for my team. He's scored 90 goals and made 28 assists from 81 games. His goal ratio is 1,1. Stoichkov's other stats is quite great. The 91 in-game dribbling make his dribbling is so marvelous. He can keeps the ball very good. His 89 agility is making his movement so fluidly. He's the agile type of player. He's not tall, so don't force him with a lob pass, because he won't get the ball (most of the time). Just keep the ball at the ground, and he will do the job done.

So, here's my review about Hristo Stoichkov Mid Icon:

Pace [90]: He's fast, give him a hawk chem style to boost the pace to 95, and he will be a quite decent pacey strikers. With his insane pace, instructs him with get in behind, so he will make a run through opponent's defender.

Shooting [90]: This is his best stats! Eventhough the base shooting stats is same with pace and dribbling base stats, but the in-game stats tell it differently. You say it, ordinary shot, power shot, finesse shot, chip shot, volley, and other shots, it won't disappoint you. Especially if you use the time finish. You just love to shoot with him if use him in your team.

Passing [87]: For a striker like him, his passing is quite decent. Any passing you use with him is okay, from short passing to long passing. When he's in the flank, you can try to cross to the middle with him, because of his 90 crossing. The 89 curve is stupendous! This stat that makes his finesse shot is unbelievable.

Dribbling [90]: He is an agile player. His dribbling is so great because of 89, 90, and 89 at his ball control, dribbling, and composure. You'll rarely lose the ball when dribbling with him. His composure also makes his execution when being pressed still great.

Defending [48]: This stat is irrelevant for him because he's not a defender. We can only talk about the 80 heading accuracy. It's an okay stat, but considering his height is only 5'10", you'll rarely get the chance to head the ball. He will still do the job done with headers if he get the chance.

Physicality [84]: You can use hawk chem style to boost his jumping to 88. It's one of his liabilities. His stamina is fine, i can assure you he can last until penalty kick (because of his med/med workrate). His strength is only 81, but because of his exceptional dribbling, you can avoid the opponents with his dribbling (or skill moves, he's 4-star skiller). The 93 aggression makes his movement quite fast, even when he's not on the ball.

I recommend you try this beast, especially, right now, his price is already on 500k or less because of the pre-TOTS market crash. Just try him. Now.