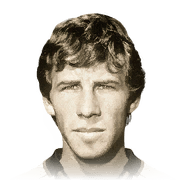 I decided I wanted to make my La Liga team into a La Liga / Serie A hybrid, but I needed someone who would connect with Gimenez and Oblak, so I made the bold move of switching to 5-3-2 formation with Baresi as the central CB and Barzagli on the right with OTW Cancelo as RWB. Thanks to the new adaptable formation change when you switch into Attacking in-game, I was able to put this small 5'9" CB at CDM in a 4-1-2-1-2 Narrow and be a rock solid CDM without having to pause the game and switch into a more favorable formation. He holds down the fort and is great at passing.