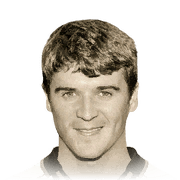 I've used 88 Keane over 25 online matches now both as a CD or CDM, and this card has been simply AMAZING!!

I've also tried 88 Veron & 88 Matthaus (starting as CB then moving to CDM), and this card felt MUCH better than both.

His continuous interceptions frustrated so many of my opponents, and allowed me to maintain a more offensive approach to my game.

Although his work rate is set to be M/H, he pops out of nowhere and positions himself at very good positions to assist or take wide open long shots as well.

I have not yet tried Petit this year, but this card reminds so much of Petit's Prime version in FIFA18. I feel like this is one of those Icon cards you can use till the end of FIFA19, and I highly highly recommend people to at least try this card out.

For only 553k on bid, my best purchase this FIFA. He intercepts almost every ball my opponent tries. He wins most headers against taller players. Stamina is really good, he controls the game until the last minute.

Hes played 69 games so far for me and scored 11 goals and assisted 24 goals.

not really any cons.

Why I bought him? Simple, M/H workrate, high def, high physical, high aggression, high stamina. with fifa 19 not too much on pace, I figure this guy is value for money compared to vieira. so bought him and test with a normal starter squad to see how much he shine through.

Played him CDM in a 41212 formation, he owns the place!! if you have tried fabinho, this guy is so much better than fabinho! tackling, passing, position, even dribbling. his aggression is really high, that's good. reminds me of vidal in fifa 18. feels like a magnet, closing to any opponent coming through the middle and just bumping them off the ball. amazing!

Tried to play him CDM in a 4222 formation, his passing feels good. supporting quite well with the attack, sharp accurate short and medium passes. passes down the flank is not so precise though.

At CM in 4321, this guy is breaking down attacks at free will! Keane is a very defensive player. Plays well in CDM and plays more defensive in CM, mostly box to box defending and attacking is more of passing rather than the surging run into box.

he's as good as his stats. not as powerful as vieira though, probably because of height and physical stats. at 3 times cheaper than vieira, I'm not complaining. 600k is very underrated for a guy like him. Petit in fifa 18 is a definite CM and cannot even play at CDM. It's truly tough to find world class CDM, and he also can double as a defensive CM, which players like kante can't even handle.

2nd to kante as a cdm but this guy is VERSATILE! can play as a CM as well. good for players who play around with different formations.

Sharp tiki taka passes, almost 95% passing each game. he's the BEST passer in my starter squad in terms of successful rate. Definitely the man to win the ball and control the tempo of the game.

tackling is on point! with him, I feel he's winning every ball he comes close to.

at 600k when i bought, its so underrated. it should be close to 900k, considering its reliabity in defennding when compares to gullit and with good luck it can even by a million!

can't really finish at close range but weirdly, effective outside the box.

don't use him for dribbling. he's shit at that. try to play short passes instead if u buy him.