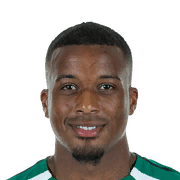 I decided to build a cheap squad so as not to waste Physical Form articles, and use the rest of my coins for a great squad.

Ok, I love my cheap squad.

Plea is a striker whose qualities are perfect for FIFA19.

Since pace is not the most determinant stat in game any more, 83 pace is enough.

His definition and shooting is even better than expected. Though it is true you should use him just inside the area preferably.

Plea is not a clumsy striker, his ball control is good enough and he has 4 star skills.

82 Strength and 82 stamina turns him into a tank also.

PASSING: nothing remarkable, good enough for a striker.

PHYSICALITY: 82 stamina to last the full game. 82 strength to behave as a wall.

There are no consistent cons.

He is 80 rated overall. There is no better option than him for 1k coins.

The whole reason i got this guy is so i could get inform Ben Yedder on full chem on my La Liga / Bundesliga hybrid team but I'm so glad he's the only french forward (i play him as a CAM) from the bundesliga that has any shooting. Although, my goals to game ratio don't prove it he is amazing in weekend league! Plea has saved me so many times and finishes like nearly 80-90% of the shots he takes from both inside and outside the box. Not only can he shoot but with maestro chem style he becomes a tank. 83 pace on his base version combined with the 81 passing 86 dribbling and 85 shooting buffs he gets from the chem style makes him the perfect CAM (he also has semi-decent strength which always helps). I know im not a professional ( i finish weekend league at around silver 1 and gold 2) but if you are trying to build a cheap team or even a 500k team (like mine) Plea is an amazing CAM and easy to link with.

-Good pace for a CAM

-Finishes mostly everything (helps if you use timed finishing)

-Sometimes when he passes, the ball moves at about 3 miles an hour but that's like once in a blue moon