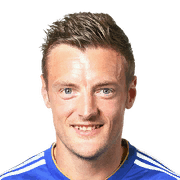 Vardy is one of the strikers people may not use because of his lack of skills. But he doesn't need skills. He is very clinical and is actually good at passing the ball around. He is really quick and is aggressive so he can take the ball from the defenders. I have now used him for 70 games, and he scores almost every game and makes assists. It says that he has only 67 strength, but that is not true. He can hold defenders like Ake andVertongen away from him when running. I give him a Hunter card so he can just run through all the defense, and also up his shooting so he almost score on every shot you take (Just also remember to use timed finishing.

Could still be stronger

Wow. What a player. Ever since FIFA 17, I have been using Vardy as a CAM in my 4-1-2-1-2(2). Absolutely insane. With high/high work rate and 86 base stamina, Vardy is an engine and will work all game for you helping out as a wing back or an extra CDM on defense, and on offense he is a 3rd striker. In WL he is a dog, hounds players, his high agression helps with that too. Vardy can win the ball back if it gets taken from him, like he can win it back ALOT. He's one of those OP players that gets forgotten about in squads. Too many people are worried about getting high rated players, but it's not worth it when you have Vardy. When he does attack he is always ready to play the one-two, even though his passing isn't that good. He can score some worldlies, but also miss some sitters. His shooting is not consistent, but with the work he puts in every game, I don't care.

Stamina (I use engine so he runs forever)

Work rate as a CAM