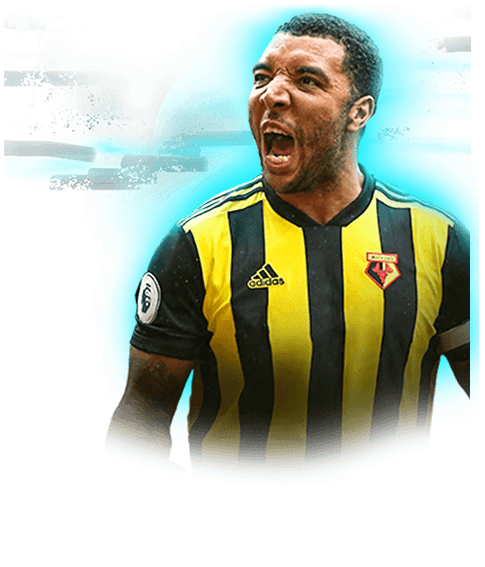 This card is an absolute joke! He is so strong and has one of the best shot I have seen in this game.

He is, in my opinion the best premier league striker you can get. The price you pay to get him comapred to Lukaku or Aguero, is so freaking low.

With his boosted stats, he feel quite fast even though his agility will let you down. From inside the box, you just have to shot and it is a guaranteed goal.

I used him as a target man because of his insane strength and he was brillant, he was holding up the ball perfectly and defenders like Van dijk, Sanchez,Varane were not able to push him off the ball. He was winning 6/10 headers because of his poor jumping but once the ball was touching his head, you are sure that the ball is going to go where you want it to be. By moment his passsing was perfect and sometimes it was very sloopy. He doesn have the best of skils but he does the job.

If you are searching for a goal machine in the Prem, buy him !!He is worth the coins and will not disappoint you.

This card is a very solid option for a Premier League striker. He seems to make very good runs to get behind the defense, and has the speed and strength on the ball to beat them when they are behind him and can score. His shooting is very good, and surprisingly his finesse shots with both feet are decent. His passing is what is to be expected, not very good, but he is able to make the short 1-2 passes my CAM so it could be worse. But, when it comes to his dribbling there is an issue. And, he is very tall and strong on corners, able to bang in those front post headers. But, when it comes to dribbling, he is not the best. He has lots of trouble turning (even with a sniper), and he feels slower than he is while running in the open field because of his poor dribbling. Overall, a solid striker for the ~30k you pay for him, but comes with certain cons that don't make the best weekend league striker.

Strength to hold off defenders

Runs behind back line

This guy is unbelievable. 99 pace, 99 dribbling and 91 strength let him beat defenders with ease. Above average in the air. His foot is pretty much a cannon. Only downside is if you don't use the right chemistry style, his finishing and passing are very sub bar. Using deadeye chem, he is terrific. Only reason his goal record isn't that great is because I play a defensive style with 2 up top. Probably the best striker you can buy with 35k.