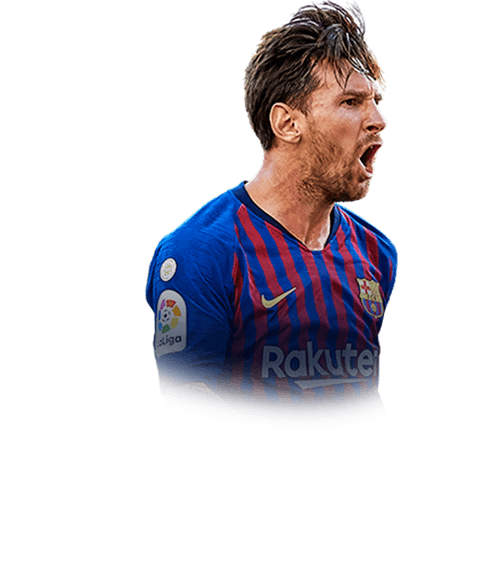 His real-life stats are currently 5 goals and 7 assists in 9 matches in domestic competition. He also received 0 yellow cards and 0 red cards.

The little Messiah is my favourite player and in my opinion, the greatest to ever grace the football pitch with his presence. I make it my goal every FIFA to buy the best Messi I can afford and score goals that only the little magician scores in real life as a way of showing appreciation to his talents. Safe to say then I'd been saving up for this card ever since the launch of FIFA 19 and let me tell you.. he does not disappoint.

(All played in Division 3 and Weekend League respectively)

First thing is first - This guy is a luxury item and he WILL NOT change your losses into wins on his own. Your priority should be building a solid foundation of a squad instead of investing in one marquee player. 5 million for this guy is no joke and an amazing squad can be built for that money. I myself have 80% of my coins in Messi, with a largely untradeable squad around him (check squad link - switches to 4231 in game). Messi plays as the central CAM behind Flashback Ibrahimovic who i sub on at the start of each game in place of Rui Costa.

Now that we have the formalities are out of the way, let's get down to business shall we?

PACE - This guy is absolutely rapid. Hands down the fastest player I've used this year. Will literally blitz by defenders and leave them in the dust. The game mechanics often favour a defenders recovery this year but with 99 acceleration, defenders simply don't have the time to recover once Messi is past them. 10/10

SHOOTING - Absolutely magisterial. 99 Attack Positioning, 99 Finishing and 99 Long Shots. His weak foot feels like a 5* one and finesses still seem to fly in from outside the box into the top bins. Not much else to say here, absolutely lives upto his stats. 10/10

PASSING - Probably the best passer I've used this year. However, he will still be prone to making under-powered passes during slow and sluggish gameplay (as is the case with every player on this game) but will still pierce through deadly through balls to your attackers. His passing is pin point and is ALWAYS at the start and centre of my counter attacks. 9/10.

DEFENDING - Normally I would say this is non applicable but due to the way the mechanics work this year, this guy as a central CAM can honestly do it all. He tracks back loads and makes some important interceptions for me during opponents counter attacks. Just don't expect to make any clean tackles with him. 7/10.

PHYSICAL - Now this one is a bit of a mixed bag. Whilst his stamina increase to 99 is nothing short of incredible and makes the few million coin difference between this card and his IF worth it, but his strength is also upped to a solid 82. But if i'm totally honest, his strength feels between 70-75 due to his small frame and the fact that body types make a huge difference in game. Don't expect a whole lot from this category, but it's Messi.. you expected it anyway! Jumping is 94 though and I feel it's important to add that he won me a lot of headers which surprised me a lot. 8/10.

I was tired of this game... the rebounds, the handicap, and all the thing you guys will actually know. So i decided to

buy those players that makes me hype to play with them, and certainly one of them was my favorite player, Lionel Messi

He is expensive, for that price yo can get 98 Pelé, 93 Gullit or TOTY Mbappe,

and ive tried Gullit and Mbappe before Messi, so i think i can give you good opinions.

First of all, His PACE, like in real life, from 0 to 100 in 1 second, his ACCELERATION is unreal,

an with his hight he feels faster than other players like Rashford or even 91 Mbappe,

i think hes equal with TOTY Mbappe in this area, but the difference will come in the next areas.

Shooting: Perfect shooting, his left foot of dreams and an amazing right foot as well, Long shots with power or with finesse shot, amazing, his finishing

i think his shooting is better than mbappe´s, but only behind in the fact that mbappe can do the tornado + volley.

Passing: OMG, his passing, ive tried Modric TOTY and with him the best passing ive tried, i thought that the passing wouldnt make that a difference,

but the passes that messi makes, wow, just wow. Free kicks, every free kick i had before, i played in short, but with messi...

its lovely, down the wall, over the wall, with curve, the roberto carlos style, its just another game, its so fun.

Dribbling: Its MESSI, the king of dribbling, and you get what you expect, apart of that he doesnt have the 5* skill moves, hes perfect,

you really feels that you are playing with the real messi, its really really fun.

Defense: Its actually really good, with his amazing pace he gets a hell of balls back!

Physicall: This is the main reason this card has that price difference, 99 STAMINA, You can enjoy this player 120 minutes without complains.

This mixed with his 82 STRENGHT, hes not Ibrahimovic, but his balance plus strenght makes him feel like the messi we see every weekend.

He has amazing jumping, ive scored a few goals with the head, winning the header in front of david luiz, davinson sanchez, or even ferdinand.

He has all the traits and specialities you want, from finesse shot to AEREAL TRAIT

If you are tired of the "competitive" boring game, you definitely must to try this card, it gave to me the fun to play this game, its sooo good, soo fun, its just the best

player ive used, the pace of TOTY Mbappe, the shooting of Ronaldo, the passing of TOTY Modric, the dribbling is just unique, and the 99 stamina of dreams...

You can have more than 1 of them in your team.... , and he hasnt got the 5* skill moves, but who cares, he doesnt need that!

I was fortunate enough to pack Messi TOTY untradeable, and he has undoubtedly been the game changer you would expect looking at his stats. In short, this card has been the difference between winning and losing games, scoring goals or finding passes which other players would not have been able to do.

If you're looking at buying a card like this, you probably have used a version of Messi before either in Fifa 19 or previous years. This card not only amplifies his strengths (Dribbling, Passing, Finishing) but also completely fixes the stamina issues present on his base card. He's also a lot harder to muscle off the ball now thanks to a +23 boost to his strength, which is certainly noticeable. His finesse shots are as lethal as you'd expect, and his positioning is superb. For some reason his heading accuracy was also boosted from 70 to 98, and this has come in handy already on a few occasions.

Some of Messi's drawbacks remain however. He's still only 5'7", and his physical presence is pretty non-existant as a result. He is also 4*/4*, and at >5m coins you have to question whether these compromises are acceptable.

As of right now, he's the third most expensive player in the game, and this is something you've got to take into account when reviewing a player like this. I've had a ton of fun playing with him, and undoubtedly he will be a fixture in my team for the remainder of Fifa 19. But if I had 5m coins and needed to buy a CAM/ST, would I pick TOTY Messi? That's debatable.