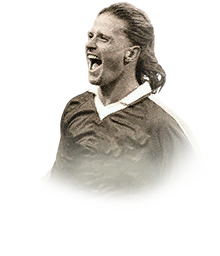 Ok, I want to start this by saying I've used toty Kante, fabinho UCL, NIF Kante, Lerma swap, guilavogui swap, 90 pogba at CDM and they don't touch petit at all. The closest is the Kante cards, but they fall short. The reason I did his SBC is that I had him in FIFA 18 and loved him. This year I heard he's ICON was just meh, but let me tell you his prime Optimus is a beast. In division 3/2 I mostly go up against god squad and as you can see by my team (link above) mine isn't one of those, but I still whoop but and now I feel super confident with my defense. Petit CDM and davil Luiz FB and VVD POTM. Petit was the missing link. These three can and will shut down any attacking no matter the rating. He is not a great passer or shooter, but his defense makes up for it and more. Gold 1 player but I feel that I might hit elite with this card in the team. GAME CHANGER HANDS DOWN. It is an expensive card if you buy him (2 million Xbox) , but SBC is far less if you have the players.

A few players are top notch, noticeable on the field - you can add Petit on that list alongside, Gullit, Vieira, etc.

Petit offers a scary defensive role in your midfield, he's strong, very noticeable, and in general just a monster.

I can't honestly not think of anyone else better except Gullit and Vieira who is multiple millions of value.

Petit locks down your midfield, you can feel your opponent trying to avoid playing or dribble around him - he will intercept, and he will bully.

Now, Petit doesn't have the height nor as long legs as Vieira, but whatever trait Vieira has that gives him octopus legs, that curls around the opponent and steals the ball? Petit has that as well.

Petit has godly defense stats, and a power shot. Passing is not his strong side, but he will get the job done. He will deliver the ball from your own half, to your strikers and wingers.

Due to the current state of the game, after the time finesse shot patch, it's hard to score direct bangers, and Petit won't do that. But he will make sure, with a outside-the-box shot, that the keeper have to give a corner - which is key, since nearpost R7 corners are OP.

Petit is fairly cheap since his card only cost around 1.2 mill on the market and 1.1 mill for the SBC.

I bought the prime 90 Petit from the market and was pleased, I then decided to cash in and do the SBC for his Prime-moments card, and boy, I don't regret it one bit.

If you're looking for a solid, META midfielder who will stay in your squad for the rest of the year, and who doesn't cost your house and your car - Petit is your answer.

Octopus legs, that curls around the opponent and steals the ball.

Outside-the-box power shot, who will force the GK to give a corner

^ but not really needed for his position.