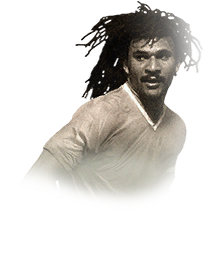 I was lucky enough to pack prime icon moments Gullit. And what a player he is, at first i played him at ST. But soon i realised you don't get the full package at that position. I played him almost 200 games as a CDM in a 433 formation and oh god what a player he is. Of course, he is a fenominal defender with his strengt, length and the pace (i play with shadow). But the best thing about him is his positioning and his visson, he is all over the place and he can give amazing longpasses. Scores as a CVM a lot of goals, mostly with corners but also with his amazing long shot.

That Gullit is amazing is obvious, but is he worth te money? This late in the game, you have a lot cheaper options that come close to the stats of gullit, i for example am playing him next to TOTS Nainggolan and he is amazing as well. So if you want the best, Gullit moments is youre CM, but you can buy TOTS players for less money, that come close.

He is all over the pitch with his stamina!

Gullit is the greatest player i've ever tried. And i have tried, Moments Eusebio, cruyff and prime R9, but they are not close to this man. The man can play on every position on the field, and I use him as COM, because of his shooting, dribbling and Positioning. The man can jump, shoot and he can sprint the whole game without getting tired. You should just buy this card for his insane hair, that makes him the highest player on the pitch. So if you think about buying other players than him. Dont. He is the best player in the game