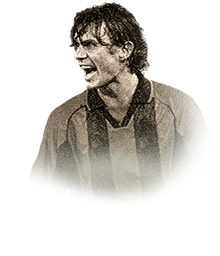 I played with him next to toty ramos in 4-1-2-1-2(2) , 83 matches 5 goals , 0 assists, after i did moment blanc sbc i found him inconsistent and made so many mistakes so i used him for maldini sbc and i'm so happy for the decision

Dribbling 9/10 : he is cb so for his agility its great ! i think his composure help him to deal with some situations in very nicely and calm way

Defending 10/10 : unbelievable he is so good always in the right position in the right time, his positioning is amazing ! his tackle is so clean !! Win the ball back in style ! Stand tackle amazing ! He doesn't make fouls and sometimes no need to tackle ! Slide tackle wow ! I did many times slide tackles from behind and was kinda late but his legs somehow go around the player to tackle

Is he worth 2m ? Yes of course ! his defending is on another level , he is the best cb in the history of football and in FUT he is the best icon cb in the game ! he is amazing and will help you so much

About a month ago, i finished the icon moment Paolo Maldini SBC. I wanted to do his SBC because i used him a couple of times in draft, where he always impressed me a lot. And of course everyone loves pacy defenders ;). I've now 325 played games, most of them in weekend league and division rivals. And i feel like i'm ready to write this review and share my experience with him for people maybe like you who are thinking of doing his SBC.

Pace: Let's start off with the stat that stands out for most people about Maldini, the pace. His pace is amazing. When a attacker gets past you, Most of the times Maldini will easily catch up to the attacker and still intercept the ball. On his base card he has 87 pace, if you use an anchor just like, his pace will be boosted even more to 92(!). Keep in mind tho that he still is a defender, which means because he is tall and doesn't have great dribbling stats he will always feel a lot heavier, which makes it hard to catch up to the real small pacy strikers, like Mertens and Gomez TOTS.

Shooting: Doesn't matter because he is a defender. Tho i found that his longshots are pretty good if you manage to time them green.

Passing: His passing is also very good for a defender. Short and long passing stats are very good and you also feel that ingame. But it's not as amazing like Van Dijk or Thiago Silva.

Dribbling: For a defender it's very good, he feels very agile and can cut corners pretty fast. But of course it's not world class.

Defending: Do i even need to say anything? It's perfect, 10/10. His tackles are amazing, even if don't time the tackle well, he still gets the ball most of the times. His marking is great and he is very hard to beat in the air, only Ibra is kinda hard to win headers against.

Physical: Last but not least, the physical. Although on the card it doesn't look that impressive, since it's all in the mid 80's. I can tell you that it's amazing. His jumping is perfect, Aggression is very good and also his strength is very good. I would still recommend that u use an sentinel or a Anchor just that his physical is boosted.