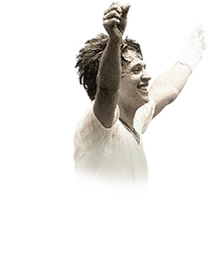 https://www.futbin.com/19/player/13115/Gary%20Lineker/ I have been an avid user of the 89 Lineker for quite a few months now. I really jive with his play style and he simply scores goals for me. You can refer to the review I did on his 89 as he's the same card but alot more OP than he already was.When they brought out this Icon Moment I was stoked because it really looks like they fixed his cons. I bought him at about 1.5 Mil and he is truly unreal now. In the 30 games I've played with him he scored 33 goals and had 14 Assists. That's a contribution of about 2 goals per game he's played.

I'm going to break him down for you stat by stat.

Pace: One of the faster strikers on the game. His get in behind trait matched with his pace he times his runs to perfection. If you see him make the run play a through ball, he will run into the space and have a breakaway shot. I'd say 60% of his goals were 1v1 with defenders chasing him from behind. 10/10

Shooting: He has god tier shooting. Its incredible the goals he has scored for me. Long power shots, finesse even with his low curve, low driven, slammed home volleys, he just puts them past the keeper. The best finisher I have used on this game. Only has a 4* weakfoot but it doesn't seem to matter to him. 10/10

Passing: His passing has been fixed. One of the beefs I had with his prime and second card was his inconsistency in passing but he has improved his game here making him more complete. With Maestro he has 95 short passing and 76 long passing (you shouldn't be doing too many long passes with your striker anyways) 8.5/10

Dribbling: 95 dribbling with maestro. He feels unreal on the ball. He can dodge, dip, dive, duck and drive through the pockets of defenders diving in at him. The only con here is his 3 star skills but I personally don't mind them. They help him exploit his space quicker if you can time them right, otherwise just push the ball into space and watch him whiz right by. 9/10

Def: Kind of irrelevant here but he presses like a mad man. The pace at which he presses the back line is such an asset. He intercepts and disrupts the passing lines pretty well.

Physical: 87 stamina is the highlight here. I never have to take him off even into extra time. I'm sure his H/L workrate

Pace + Get in behind,

All kinds of Shooting,

Positioning (one of the best poachers)

Skills? There really aren't any cons. Stick to his play style and exploit the defenders.