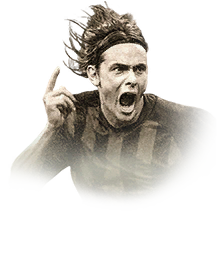 Filippo "Pippo" Inzaghi is quite possibly the worst high-rated player I have ever used in FIFA. His skills in real life do not translate to this game whatsoever. Alex Ferguson was once quoted as saying “That lad [Filippo Inzaghi] must have been born offside.”. Unfortunately, that's not the only issue with him in this game. He couldn't shoot up a heroin-filled needle let alone a football and he has the touch of a newborn giraffe. It's hard to articulate just how awful this card is. I had to displeasure of using his loan card for 12 games (did the loan SBC and also got a 7 match loan from a weekly). Please avoid this card like the black plague if you value your sanity.

Inzaghi is an amazing shooter, and can basically make anything. I've used 95 Suarez, 92 Griezmann, 90 Aguero, and many others, but Inzaghi has definitely been the best shooter out of all of them. His heading and jumping is great too. The only problems are his passing, 3 star weak foot, and 3 star skill moves.