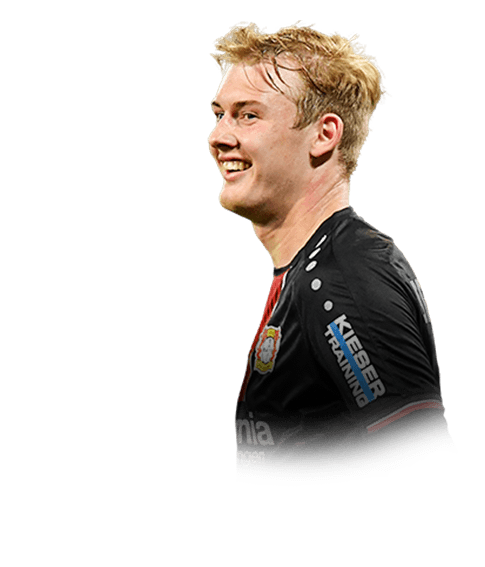 So, a disclosure. I'm a BAD player in FIFA. At first i was putted on div 5 before i got down to div 9 and recently got back again to Div 7. A Elite 3/2 player in Squad Battles usualy playing in Legendary and still losses probably 4-5 in 10 games. With that got out of the way, i just got smashed 3 times and got 2 dissapointing draws. But only one player who stood out on at that time, Brandt. I bought him for around 50k or so and was not really feeling confident about his stamina since he would be my left CAM on in-game 4-2-3-1. And yes, his stamina occasionally brought some problem especially on late game. Yet, i had bigger problems to face like, "How i can get through 1-depth defence with my slow POTM Kruse? (on Maestro)" or "How i can hold the ball long enough to release it on my wingers when i felt Firmino got anxious quickly all the time as target man?" Those problems made Brandt's stamina a smaller one than others.

His pace is good enough if you know the limitations (i mean don't try to sprint with the ball with 90 Valencia on your back), so his dribbling is nice to have to get out from those pesky full-backs. When i did some skill moves in him, he didn't feel really cluncky at all (not like kruse with low acceleration so i need to skill at quite a large space so i don't get caught by the defenders).

PACE is an 8 for me, while his DRIBBLING is 9 since his dribbling is much better than my other attackers in my starting 11.

HIs shooting is good, especially when i will NEVER get into the meta. So, old timed-finesse-long shots would do the trick. Well, his shooting is good and you could get another chemistry style to boost his shooting even more. In the penalty box he can shoot with his both feet since he has a 4 star weak foot yet still De Gea will save it 5 time out of 10 probably. But that's not really his biggest strength (to me, every player has a different opinion about this) based on the stats.

Now, let's talk about his Passing. Lot of his assist came from crossing, (so i would took back my words about not in to the meta since i'm obviously doing it too) and his crossing are sublime, mostly on target and just the player who he targeted was letting me down. Couldn't comment on his through ball to beat defenders since usually he was too fast to his teammates. But his short, basic passing is solid and rarely intercepted (except when i did the mistake myself) and the curve helped him to do some finesse shots.

On Defending is an anomaly for me, since he helped Alaba occasionally defending the flank with his 74 strength and could beat a defender in the air. But, don't expect him to score headers with his 47 Heading. On Physical though, like i said, Stamina is good for a mediocre to bad player like me, his strength would help a little bit when guarding the ball or dueling against other defenders (not only full backs because i lake to drag him more to the inside to take over Kruse's job i guess), just don't put him next to Van Dijk and you'll be fine. And he's not really agressive when we didn't have the ball so that's helped him conserve his stamina a bit.

Finally, i think that's it for my review for one of my favorite players to play now. If you have any comment, please feel free to say it.