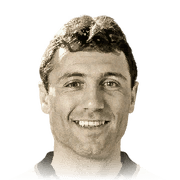 I got Stoichkov thinking that he was going to be an amazing forward and my god was i right. I played him with a hawk which gave him 97 pace, 99 in every shooting stat aside from long shots as well as 88 strength and 99 aggression. The man is absolutely incredible... 67 goals in 41 games later he is my second favourite player behind Prime Best. He feels absolutely rapid, pace could be 199. His shooting is un-fucking-believable, who cares about a 3* weak foot he will put it in from anywhere. His left foot is terrifying, he has an absolute thunder-cunt of a shot from inside the box. His dribbling is Messiesque while his passing is decent for a striker. His physicality echos that of Ronaldo and 4* skills is enough for your average fifa player. One of the best players I have ever used in FUT.

Dribbles better then a spastic

More physical then my abusive father

Very good card. I packed him so that is why im saying coin worth is high for this card. Worth it in different ways. Finishing is spot on. Outsides finess or power shot; makes no difference. You don't really need a striker with passing, but its good to have one. doesn't feel as fast as he looks card wise, but is still fast, don't get it wrong. He can hold up play, but doesnt have as much strength as his card says. Fells weaker.

Shooting-anywhere he can bang his shots with 94 finishing and 92 shot power. Has all 90s stats for shooting which is incredible.

Passing-for a striker, its better than a lot of other strikers

stamina is decent so you don't always have to sub off

his strength is questionable

This is my second review on Futbin. I know Stoichkov isn't one of the most popular players in FUT, but he is so so good on this game. He's the best forward I've owned so far. I've used Aguero, Lewandowski, Neymar, 2IF Salah, Mbappe, Flashback Pato, Flashback Sturridge, etc... I put my entire team into his SBC. Including, UCL Firmino, Aguero, Kante, 2 IF Van Dijk, Varane, Rui Costa, IF Alisson, Futmas Alli.(all undtradable) I needed a fresh start on this game. I was frustrated/bored and 2-6 in the WL on Friday. After getting Stoichkov, I finished with 14 wins and a few games to play. I came up against the prime Best a few times. My Stoichkov outplayed theirs every time. I loved every minute of using this card. He's clinical, fun to use, can take insane shots, skill through any defense. He currently has 36 goals and 9 assists in 29 games. And is his weak foot an issue? NO. His 3 * WF did not give me any problems passing, shooting, crossing, etc. My team is linked, But I elected to use the 4-2-3-1, 4-2-1-2(2) instead.

Pace: This guy is rapid. His 93 Acceleration feels better than Messi's. It is only bettered by Mbappe IMO. He makes his runs before the defense can turn. I can't count how many breakaways I had with this card during the WL. He can't be caught once he's gone because of his 83 Strength and 93 Agression. The only player that caught him and successfully won the ball back was TOTY Varane. On the ball he's so so quick but I'll touch on that in the dribbling.

Shooting: WOW. I've scored my three best goals with him in the span of about 15 games. In the first game, he hit a first-time finesse from about 35 yards out (Over Nueur). I was 1-0 down, and that kick off goal brought me back in the game. This card has 94 Finishing, 92 Shot Power, Long Shots, Volleys, AND Penalties. MADNESS. Can't forget the 90 Curve.

So, "Timed Finesses." The main exploit of FUT 19. He is the best. I can take a shot from anywhere, even inside the area, yell "goal" and without looking, know Stoichkov made the shot. Someone moves their keeper well? No problem. He can chip, rifle, scoop, bend, you name it around the goalie. He's scored around 6-8 on his 3* WF as well. He can take outside-the-box finesse shots on that WF as well. I hit a few in the yellow, using his right, that went in. Overall, his shots are probably only rivaled by CR7, Lewandowski, or possibly Messi. But no one is BETTER, just on the same insane level.

Passing: I had no problems with his passing. He can ping it around and send through balls with ease on either foot. He possesses 88 Vision, 85 Crossing, 85 Short Passing and is a pleasure to dish out assists with. He recorded a bunch from his striker role. Passing includes Free Kicks according to FUT. He has 89 FK Accuracy with that 90 Curve, and 92 Shot Power, he can bang them in from set pieces. It's worth noting that his 3* WF didn't affect his passing range or accuracy.

Dribbling: Imagine Messi had more Strength. That's it. His dribbling is on the level of Messi, no exaggeration. He has 90 Agility, 92 Ball Control, and 93 Dribbling. There are cards with higher dribbling stats, BUT.... They don't have 93 Aggression. That stat makes him so tenacious and fiery on the ball. He goes in and out of skills rapidly and allows him to get shots off at great angles. His dribbling is very similar to Griezmann's but a little better.

Defending: HE CAN WIN THE BALL BACK! He kept me in a few games just by having high aggression and strength, I believe this would allow him to be a great CAM or even CM. But this card is 100% suited to playing up top.

Physical: YO... He's beastly and feastly bros. He was last seen pushing Van Dijk over and calling him boy like he was Kratos. Look, he isn't Lukaku strong, but he can actually dribble a football so.. His aggression makes him so annoying to play against I'm assuming. I'm glad he's in my squad for this reason. He strikes fear in opponents when he's lurking in their box, waiting for an arrant pass, or a bad touch. He's great in the air too, he won quite a few headers fro corners, goal kicks, crosses. No slouch in the skies. His 86 Stamina is great. No complaints.