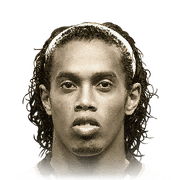 There's so much to talk about with this card. I thought it was a big risk buying this at 2.7m on Xbox but almost 200 games later in Div Rivals and Weekend league I have to say I haven't enjoyed fifa this much in a while. The Nostalgia of using this card and his ability on the ball to create for others or take the opposition on and do everything himself make this card the ultimate weapon. It's so so fun to use and I cannot stress that enough. When I first purchase him I had him as a CM and 10 sweaty prem players surrounding and built upon my squad since then after lucky rewards and pack pulls. Buying and selling other icons allowed me to build and gain coins quickly. R10 is has been and still is the star in my squad. He's incredible in so much like his pace and strength combo make it impossible to get the ball off of him. He bounces around and off the opposition with the ball at his feet. His shooting is pinpoint accurate and has the abilty to swerve in those OP timed finesse shots on either foot. This version could be improved on with a tiny bit more pace and more consistent final balls but R/10 will stay in my team because of his central position. He's the main man and I would encourage anyone who has the coins to buy this monster. You won't regret it and will love the special tifo's pregame for this star.

Agility and Pace make him hard to catch

Ability to find space off the ball.

Strength and Dribbling are a dangerous duo

Variety of Shooting (can nail power shots, finesse, low driven, volleys, you dream it he can do it consistently)

Scores worldies and makes the game so fun

Expensive (however worth the value IMO)

I'll try to analyse this card fairly - without my inner Ronaldinho fanboi clouding my every judgement.

First and foremost this card was very expensive.. Second of all I have no regrets.

Thirdly yes I will rainbow flicking and waka waka(ing) all game because I spent 1.9 million coins to do that shit.

Fourthy he is a beast IG (in the right hands.)

He has a well blended mix of high balance and agility alongside a favourable amount of strength.

His execution of skill moves feels crisper than anyone I've tried in the game.

He has more than enough acceleration to break opponents back lines and score goals.

Right foot is deadly both in the box and from distance.

Passing is always on point and will never let you down in that regard.

His positioning off the ball is incredible - probably the first thing I noticed that really stood out.

HE IS SO FUN - Especially to utilise skills and tricks with - during the game he will draw a lot of fouls.

Now for a 1.9 million player there are some noteable cons.

Sprint Speed is a let down - he will get caught a few times in a match and you will be hurried into either shooting or rabona faking etc to create space for yourself.

Ariel threat he is non existent.

Now in terms of meta potential he isn't overpowered in any particular sense.

He does not have the pace of a cr7 or prime butra nor does he have the overwhelming physical of Socrates or an Ibra. But as a skillful all rounder he is a joy to use but there are more overpowered less exotic options for cheaper.

I was lucky enough to pack Dinho in a 7.5k pack. I was over the moon. Instantly put him into my team to play upfront with Baby Kluivert. I really enjoyed using him and will continue to for the coming weekend league but I think i try to force it to him too much and the defender can read me easily.

Once he gets the ball he glides past defenders

The flick - volley works so well with him.

Through balls to Kluivert were insane

Price (if I bought him)