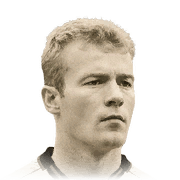 This is my first review ever so bear with me.

I was lucky enough to gather enough coins through trading and games to be able to buy an icon striker for my team and was looking for one that would be deadly in front of goal.

At the time i bought him for 820k and I wasn't disappointed. I immediately put the hawk chem style to boost his pace shooting and physical.

He is a monster in front of goal given the chance. So far he has not missed many chances he has had and has even created some goals out of nothing. There are times on a bad cross or a bad rebound that i thought that he will never be able to strike the ball cleanly and every time he proves me wrong. He has so much power behind the shot keepers most of the time cant react fast enough.

Since this game is not about pace that much anymore it gives players like Shearer a better role in the game. He is not the fastest but by no means is he slow. He can gain some distance on a defender but you have to shoot or pass or else the defender will catch up to him. His finishing is insane and surprisingly acrobatic. In one game he scored 2 bicycle kicks. Also don't sleep on his curve it is deadly, maybe because of the state of the game but he has scored some crazy finesse shots.

His passing obviously could be a lot better but it is enough for quick one twos. Do not try to make him do through balls or long passes often, he is a striker not a cam or cm. As a true striker he wont be making the god tier pass or the game changing through ball but he can do a short pass to open room for himself to get in a better position.

His dribbling could be better but is enough to hold on to the ball with out taking horrible touches. His composure helps a lot when under pressure as he remains cool and collected to shoot or pass. Again you wont be dribbling down the wings with him but he wont take heavy touches or lose control of the ball.

This is another part where he excels. With 98 jumping 90 aggression 93 strength and 84 stamina, he barely gets tired and is deadly in the air. Also with the 94 heading accuracy every header is going on target. All these things go hand in hand during corners and crosses. I cant express enough how deadly he is in the air. He positions himself while the ball is in the air almost perfectly. There were a lot of times when my opponent during a corner would mark him with 2 defenders one the AI and another he controlled. That made no difference as Shearer moves and positions himself to receive the ball perfectly and score headers or bicycle kicks. There were also times when the keeper would come out and still would not jump high enough to beat Sherer in the air.

His shooting is almost perfect

His jumping and heading ability is insane beating almost anybody including keepers in corners or when receiving a cross.

He is strong enough to hold off defenders and wait for a pass or create a chance to shoot.

Pace could be better he is not the fastest but that being said he also isn't the slowest player ever.

Passing is not good apart from short passing but he is a striker so he wont in charge of making the perfect passes.

Price is a lot but he is an icon and all icons are expensive. There might be cheaper options with similar stats.

I had to decide between Lineker, Vieri, Hernandez, Shearer and some other Icons around and below the 1.0M mark. And this guy is the killer, no regrets! A goal ration of more 1.0 in weekend league for me, especially because of his insane finesse shots with that sick shot power, when you green it its a 110% goal, the keepers just bend their hands behind with this silly animation. I guess that's the hidden Icon feature of Shearer that any finesse goes in. And in addition he is stronger than van Dijk, Ramos, Bailly, Boateng and all these gold defenders. Many times I just took the ball of the defender and put in the back of net from outside the box ... caused many rage quits. And his price for 800k is way too cheap comparing it to the trashy 1.0M icons ... the Icon market will probably rise through whole FIFA, better get him quick!!

I used Alan Shearer in FUT Champions for a section of my weekend and am now selling him, as he was missing very basic chances from inside the 18 yard box, which most of my other players (SIF Mbappe, Kevin de Bruyne and even N'golo Kante) would have buried. I played in a 4312 formation with Shearer and Mbappe up top and De Bruyne behind in CAM, and once i got into the final third I would usually play the ball to either Shearer or Mbappe. I would not play it to Shearer as he could not score at all (the only time he scored was from penalties) and I would not reccomend Shearer at all.