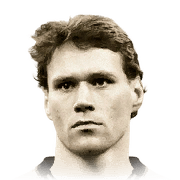 This card is insane. He will score you so many goals. He is great around good wingers who can pass him or cross him the ball because he finishes everything. I definitely recommend him for any FUT Champions squad.

Shooting: Every shot he takes goes in from any distance. He is amazing at volleys which are so overpowered in this game and his composure is so good in front of goal.

Dribbling: He is good at dribbling and is good at quickly turning to get a shot away in front of goal.

Passing: He has solid passing for a striker and doesn't give the ball away.

Stamina: He doesn't get tired at the end of the game because of his work rates which is nice,

Pace: Can't outrun players but no player can in Fifa 19

When I picked this guy up for 715K, I had high expectations, but he's gone and smashed them. This guy is never being replaced from my team. His shooting is perfect, he's great on the ball, and is good enough in linkup play to get assists. His pace (79) is a lie, he feels more like 85 pace. His strength and jumping also feel lower than the stats themselves, and he wins tons of headers. At 700K or so on PS4, this man is worth every penny, and is only going to be replaced when I can get his prime.

If youre on the fence between his baby and mid like I was, pull the trigger on this bad boy. Best striker under 450k in the game. We all want icons to make game changing impacts and this is the man right here.

His pace with hunter is decent and he can beat most defenders while being strong enough to go shoulder to shoulder with them.

But oh god his shooting. The man has two cannons for feet. If you have the least bit of space - just shoot- doesnt matter where you are at all.

+Shooting ( BEST finisher in game. I cant name the amount of goals he has scored where i was just dumbfounded)

+Pace (with hunter combined with his positioning more than fast enough)

+Physicality ( Stats wise his phys is average but due to his massive frame he is a BEAST in the air, very very surprising)