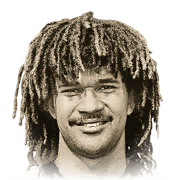 No one compares to this man adding this player to your team is like giving yourself the infinity gauntlet with all the stones. This is the first player I can honestly say improved my team's defence, passing and attack. He is the only player worth spending most of your coins on and makes the question of having a balanced team or a one man team a hard question to answer. This man can create score and save, he is elite in every position, with being undoubtedly only bettered in cm and cam by the better versions of himself. At st is feels like a less clunky Ronaldo, at cdm a more attacking Vieira, in defence a hybrid of toty Ramos and Van Dijk.

Shooting- his shot is a rocket and in unerringly accurate. Very like Ronaldo's shot and better than every other sts that I have used.

Passing- Comparable to Toty Modric maybe not quite as precise but more crisp and dictates the tempo of the game.

Pressing- His high defending high up the pitch means his pressing in unmatched by any attacker I have ever used and the main feature that improves the team overal.

Heading- Like fb Zlatan, Cr7, or Van Dijk he seems to win every single one and with high accuracy.

Defence- Solid his size and agility makes it seem better than his stats say, with only his work rates maybe a let down.

Dribbling- For man his size to have over a 80 agility and balance is incredible and is what separates him from other big elite players like Bale, Cr7, Vieira, Ballack, Flashback Ibrahimovic. He so much smoother on the ball and is far less likely to be knocked over or put off balance to force an inaccurate pass or shot.

Pace and Physicality- Again I think due to his balance you cant shrug this guy with his pace he is unstoppable, one of these players you can literally run through defenders with.

Very expensive but worth it.