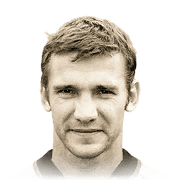 Andriy Shevchenko was an incredible striker, clinical, quick, accurate, really smart in term of positionning and choices, good in heading, for me he is one of the best complete strikers of the 21st century.

After i made around 800k by selling some expensive packed players and by investing in other cards, i decided to buy this card (which i got for 750k on PC) because i needed a very efficient striker on my team. And I think that i probably made the best choice i've ever made in this game by getting this card.

He is extremely good IG and definitely a reliable ST for the price i paid (ngl i would pay even more, probably around 900k, for this card)

What I expected from this card was his ability to be clinical in at least 90% of the situations (and his ability to save my butt in 90% of the games lol), because, like i said, Shevchenko is a complete striker IRL.

Without surprise, he is in game as well, he can do some great runs, using his dribbling and his strength, he can combine with his close teammates, as his passing stats are not as bad as they are, he can deliver assists, score great headers (even with 84 heading accuracy), short range or long range shots, free kicks, some volleys as well....

His finesse shots are insane, you just need to get the right angle, the right power and that's it. His normal long range shots are great too, but i don't use them a lot this year, as finesse is extremely efficient. Also, it doesn't seem like he has a weak foot (even with the 4*WF). He also is incredible in direct free kicks.

I used him with the Hawk Chem style, and i got really surprised by his strength, for example a CB like Azpilicueta or even Bailly IF could struggle to get the ball back from him. Using him as a target man in a 2 striker formation, with a quick and agile striker/CF like Reus , it got me around 95% of my wins since i got this card.

His dribbling is also really good as well, great ball control, great reactions and composure especially when he is surrounded by defenders. The fact that he only has 3* skills is not really a problem after all, but ngl a 4th * would make this card unstoppable.

Something that surprised me was that he was good in putting pressure at the opponent's CB, his 75 aggression with Hawk feels more like a 80+.

With the Hawk Chem style he should have 90 sprint speed, but IG it feels more like a 85 sprint speed, which is weird but not a huge problem.

Also, his passing is decent but not that consistent, as sometimes he can miss an easy pass.

But the big problem about this card is his stamina, which can be annoying depending on how do you use this card. I tried this card in a 1 striker formation and he got easily tired at the 80th minutes, and without a great CAM, or even a bit of space, he can be shut down easily.

My advice is that you should use him in a 2 strikers formation like i do now, and his stamina won't go down that quickly.

This man was my dream. I used to pick him on my team in Fifa 07. So I’m going to write reviews on players in my current team, which I am very happy about. I want to give people an honest review without saying “he is a god, will score any shot and will dribble past anyone, best player in the game OMG”. So without further ado here is my review.

Pace: Here you have 2 options: Either give him an HAWK or something without pace and then he is more of a number 9 who can hold the ball etc. However if you give him a HUNTER card. His pace goes to 94. Which is a good number to give him some through balls. He can outrun a few defenders and combined with his standard strength he can stand his ground. So depends how you wanna use him!

Shooting: This is this cards specialty. As I was saying I don’t wanna overhype anything. But the main thing about the card is the shooting. His timed finesse is out of this world. If you get him to his right foot outside the box and you time well. It’s a goal probably 8/10 times. His shooting is really good. Not just the finesse but also just the straight line shooting, which well I wouldn’t want to be the keeper receiving that shot. Combine this with his amazing positioning and well he just bags goals that’s it.

Dribbling: This is where I think this card lacks, this is after all an honest review. He is kind of cluncky, turning and spinning is not his thing. He can dribble in a straight line, but mostly you want to avoid doing Messi things with this man. Just pass him the frickin ball on the edge of the box and let the shooting do the work, get someone else to do the dribbling for him.

Passing: I don’t have a lot to say about his passing. His passing is okay, now and then he gives a great pass, because of his curve, but overall he can pass a ball into your feet and its fine.

Physicality: So this is another good point. No matter which chem style you give him, he will always have quite a bit of physicality. Combine this with his character being a bit buff and clunky and he can actually hold off quite a few defenders. Also he can head the ball pretty well and scores quite a few headers. The accuracy of his headers are good and he is pretty good in the air too.

Overall I would obviously recommend this guy if you like using finesse shots, because he will score them. He is in the right place of lot of the time and he is just a really good striker. Combine him with somebody that can dribble and pass the ball very good to him and you are set!

Pace if you want

Stamina, but not when used as a striker