This is a great time to do this SBC, he’s around 1.9m on the market but the SBC is 1.3m, you get packs back and right now the packs are stacked so the chances of getting decent cards are quite high – I got about 300k back and if like me you have a load of untradeables and an icon you no longer use then he offers great value – I reckon I did this for 250k-300k

Anyways on to his performance. His workrates are perfect for a CDM, and he sits in front of the back four and breaks up play, being 6ft4 means he’s incredibly hard to get past and he often makes tackles and interceptions other players can’t make, he’s strong and aggressive as well so despite tackling being broken and the ball often going to the other team again he gets his foot in loads in centre mid. He’s amazing defensively off corners and beats pretty much everyone in the air, he’s a presence on the pitch as well and he seems to panic attackers who don’t try and take him on. He’s the best defensive player I’ve used all game

His passing is good, I have engine on him so that ups that but he’s good at getting attacks started and passing it on when he wins it back

Agility and balance are not great but that is to be expected with a player his size but I don’t have him to twist and turn, he’s strong and with his back to your goal he can hold players off before passing ball on.

Shooting is garbage, he’s not bad from range and I think he’s scored one for me that way but he has got  a few headers for me from corners but he’s no good 1 on 1 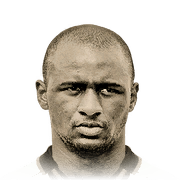 I was surprised to see there was no real review on here, and i thought why not do one and help some guys out who are thinking if you should do his SBC.Do you play 4231 or 41212 - and in need of a lone CDM? Big Pat is the man.
Read full review

The best CDM in the game

After contemplating for a long time about which icon SBC I should do with all my untradeables, I decided to go for Vieira after trying out his base version. I didn't think it was important to have a good, tall, defensive CDM, but after using Vieira for a few weeks I don't think I can go back. I will break down the stats and discuss why I think this card is so good. I've been using him as a CDM in a 4231 an...
Read full review
0
/600
Update my avatar Dos and don'ts
Top Rated
New
Controversial
Show comments