As the title states, Diego Costa is good at one thing and one thing only: putting the ball in the back of the net. As someone who is normally pretty wasteful in front of goal, finding a striker that can do this with consistency is priceless and Diego Costa fits that requirement perfectly. If you're like me and you grind out 1-0 or 2-1 wins, Costa is the perfect striker to make the most of the handful of chances you have in front of goal. Overall, if you have good players that can work chances for the striker he will finish those chances regularly.

He won't run away from defenders, nor should he with 75 pace. That being said, he doesn't need to, as his game is doesn't involve running at defenders, but getting into good positions and finishing off moves.

By far his most important stat, Diego Costa's shooting is amazing. He excels at shooting inside the box, whether it's on the turn or one touch. His long shots are decent, but I wouldn't try anything too crazy. His finesse shots are also ok, but don't expect to score too many insane curlers from outside the box, because its not his game. Lastly, his 4* weak foot is great, and allows him to score freely with both feet.

His passing is meh. Try anything longer than about 15 yards and it will most likely result in frustration. That being said, if you keep your passing short, and use your midfielders to play longer passes, Costa's passing won't be a problem.

Strong enough to push defenders off the ball and win it back occasionally, but doesn't really matter in the grand scheme of things.

Absolute beast. Holds off defenders with ease, and combined with his decent dribbling and good shooting it makes him a menace in the box.

Strength - can hold off most defenders, hold up the ball on long balls up top

Heading - very good in the air

Corners - great at scoring bicycle kicks at the front post

Pace (kind of) - he isn't fast, but pace doesn't seem to matter as much in this Fifa,

Dribbling - combined with the skills, I would avoid trying to dribble through defenses with Costa, it just isn't his strength. 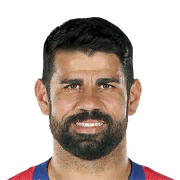 Diego Costa was the first tall striker in Fifa 19 that was great for me. Even after the last stat changes he is still fantastic.  Pace 9/10 (speed 10/10; acceleration 8/10)Usually, a striker is either fast or tall, but Costa'space is incredible. As soon as he hits his top speed, almost no defender cancatch up. However, it has to be added that obviously his acceleration is ...
Read full review

I got this beast during the very first UCL SBC where you get loan Aubameyang and two untradable UCL cards, and after 132 games with him, I thought it was time to share my opinion. In general, he doesn't fit my fast ball movement and agile attacking play style, but he is great at holding up the play for a secondary striker or CAM, in my case Rodrigo or Isco, to make a late run to catch the defense off guard. Well it's either...
Read full review
0
/600
Update my avatar Dos and don'ts
Top Rated
New
Controversial
Show comments