Where do I start.. I absolut love this card!

Perfect mix between physis, dribbling and pace. With a Hunter card he's a absolut beast! But you can also use Catalyst do boost his passing to almost the max.

He's very good in starting at the wing and coming to the center to finish with his left foot on the target. Most of the finesse shoots are in!

You also can change him in-game as a CAM because of his good passing and vision.

Also he plays in a good league, has a good nation an plays in a very good team like Juventus(that is skyrocking in this fifa 19, because of the good links)

In my opinion the 15k is much to low for this card at the moment, because he's so flexible(also as an CM).

you won't regret buying this card. He almost scores in every game and if he doesn't, he give you 1-2 assist per game.

best team in Serie A

Maybe the 3 star weakfoot, but you don't need it if you prefeer to go from wing to center to shot on target 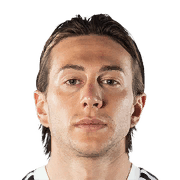