I bought him to upgrade the right CDM in the scheme 4-2-3-1. Earlier Kante played on this position and was very good, but constantly:

a) lost all headings

b) not an assistant in the attack at all

All these obvious disadvantages of one of the best midfielders in the game I decided to close by prime Veron 90. I will say this, he did not fully cope with this task for 100%, but he was very good.

Played with the style of teamwork Shadow.

Veron coped with all tasks in defense for 95%.

This is the best player for any "box to box" position (CM, CDM). In attack he is good. In defense he is divine. Better than him, perhaps, only Gullit. 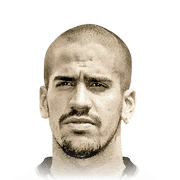