Picked him up when he was 460k and instantly made a big impact in my time, initially at CAM in 433(4) and now at CAM in a 4222. He's got great finesse shots from his right foot, but doesn't ever seem to produce on his left which is a shame, they're accurate but never enough power to get past the keeper. Maybe not buying him if he is currently at 660k, but below 550 and he's your guy. Without changing game tactics he does seem to be back a lot, after most corners he's the man who intercepts a counter attack, and he's always tracking back when needed

Sweet finesse on his right

Outmuscled off the ball occasionally 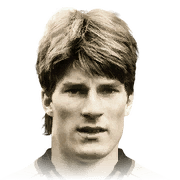