So I never wrote a review in any kind but this card was defenitely worth writing one. I play fifa since fifa 07 and ultimate team since fifa 12 so I know the dynamics of fifa and fut. I played on Xbox but got the Playstation from a friend so I could play with his beast team (around 5 mil coins) (see link). I had the oppurtunity to shuffle around the team and buy/sell some players. I started playing a weekend league with henry ((90) and CR7: I wanted to play 4-3-3 Attacking /4-2-3-1 when in defensive and played Henry as a cam behind CR7. He just didnt work for me. I love Henry but his 90 rated card just did not perform: slow, not very strong and just not fitting my playstyle. So I decided to go for 90 rated stoichkov. Man what a card he is at CAM. I think he might be the most underrated icon but makes him cheap so I wont complain. But if you have 1.2 mil lying around: just buy this guy.

Although I loved the CR7-Stoichkov combo I wanted to try a very expensive striker so I came up with the Ronaldo-Ronaldo combo. I played R9 at striker (90) and CR7 at cam.. and man this guy is just a Monster: His shooting is insane (although he sometimes miss sitters) but his dribbling is outrageous. Just dont look at the aggression stat; its bullshit. When he runs with the ball and comes in contact with the defender somehow 9/10 he will get away with the ball and the attack will continue.

One other very very amazing aspect about the card is how op the LB (L1)- Fakeshots are. He can do like 5 in a row and no-one catches him. Another thing; the 5* 5* combo is ofcourse a 4* 4* for the 90 rated card: dont care about that: his shooting with his left foot is as good as with his right. Remember that when buying R9 94 you spent more than 2 times the amount for the 90 rated card and you could easily buy like a Eusebio of Stoichkov for that. So really dont hesitate and try this guy: you wont regret it! I scored 48 goals in 28 games with him. Where ronaldo is 122/136 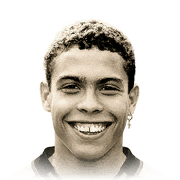