Traore was the first IF I packed in FIFA 19. At that time he was not selling for huge amount of coins so I decided to give him a go. Since then he has played nearly 300 games. I start him at RM in 4-4-2, but change to 4-2-3-1 in game, when Traore becomes the right CAM. I keep the instructions for him as they are and he takes my corners from the right.

His biggest strength is his timed finessed shots when he cuts in to use his stronger left foot. No matter if it was inside the box or for example 25 meters out, Traore can finish it to top far corner. His long shots are only 69, but it seems that sniper really boosts that so they really are a threat. His pace and dribbling are great and with 4-star skill moves, Traore is able to make runs to create a scoring chance or set up his team mates. Passing is ok, but I prefer to shoot with him. Strength is only in the sixties but he is quite tall at 5´11, so he isn´t always bullied off the ball.

Time to talk about the biggest weakness, 1-star weak foot. I recommend you not to use his right foot at all if possible. I was aware of that right foot when I first got to know his IF and since then my mindset has been that I don´t use his right foot. Now when I have played 300 games with him I naturally always cut left to use his stronger foot. Sometimes I accidentally shoot with his right foot and that has not been awarding. Only times he has scored with right foot are tap-ins into an empty net. Traore has an OK stamina, but if you go to ET, he will be very tired.

All in all, Traore is 100% value for money. He is very cheap so you can´t make a huge loss if you give him a go. Also he is a great strong link for Depay as there are not many others.

Stamina (only after 90 minutes) 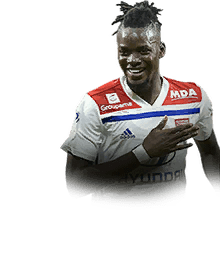