I have tried a few (icon) strikers this year which I will reference here for comparison.

My two teams (one from the Bundesliga and the other from La Liga) in a 4231 need a striker who can play solely on top without getting bullied away from the ball too much and who can also deliver same short range passes in the important areas up front.

Since Middle Raul is the 4th icon striker I test, I was a bit worried if he can deliver enough for his price tag. Baby Crespo, Middle Crespo and Baby Van Basten are the other icons I can compare him too.

I must say that of all these strikers, Raul is the most complete. He integrates very well in my offensive play (not as the Crespos, they sometimes disappear. At least against defensively good players), makes good runs and can also run through defensive lines despite his moderate strength and aggression stats. His passing is way above the other three and that's what I like most about him. He is not as dangerous as Baby Crespo when it comes to shooting, not the same tank as middle Crespo or van Basten...but the better integration into my team due to his good passing and runs make him a lot more valuable.

van Basten was a joke when it came to fast dribbling and turning around. The Crespos were better, but too sloppy for fast acceleration and direction changes. Raul is just about right. He may not be comparable to Del Piero, Götze, IF Ben Yedder or Elite Icons, but for his price (I payed 1.1 mil on PS4), he is good enough!

His shooting is better than I expected. When you time it right, its a goal in most cases. van Basten was not able to permanently deliver well in that field.

The Crespos were better, but did not get so many opportunities since they are not as agile as Raul.

From all the strikers I played this year, Raul is the overall best. You may have cheaper ones, but they will all let you down in some situation. 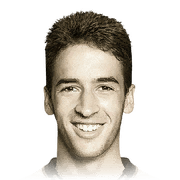 Short answer: Yes. For more information please purchase 300 Fifa point to continue the rewi- mhm, sorry, my inner EA came out for a moment.Anyway, if you are looking for an icon, only do that after you have a team around him. Be it any other icon imo. I'm only an average player, only reaching gold3 in WL but at least reaching that every time I participate so before going for an icon...
Read full review

Raúl González Blanco is not just an icon he is a LEGEND and in game he plays like one. This card is brilliant. His speed, dribble, passing and shooting are amazing. He can score from every single angle. Perfect headers, strong feet and unbelievable balance/agility. I recommend this card if you need a good striker or a CAM with excellent shooting skills, dribbling and passing. Pick him up if you can give him the number 7 a...
Read full review

Raul a lot better than expected

I tried this card after using: Stoichkov (87), Hernandez (87), and zola (85) and he was absolutely insane.On his own he got me at least 10 wins this weekend league and helped me achieve elite for the first time.Next week i'll test him out with CR7 upfront and hopefully ,he will be even better.Have fun using this BEAST.
Read full review
0
/600
Update my avatar Dos and don'ts
Top Rated
New
Controversial
Show comments