This Pelé is on ANOTHER level, BY FAR the best striker I've tried.

He just makes scoring effortless, always finding the space to get that finesse shot away and in the back of the net, doesn't matter what foot (best 4* I've ever seen) or how far away from goal.

This card is so OP I'll use it until I can buy his prime.

91 Pelé was just not good enough, he didn't feel amazing and his lack of curve killed the card because of this FIFA's finesse shots.

Contrary to most people I used ARCHITECT chem style on the card even if FUTBIN shows he's higher rated striker with other chem styles because they make him max out on shooting.

Truth is you don't notice the difference between his finishing with or without boost. But Architect boosts physical (aggression) and Passing (CURVE UP TO 89!!!!!!) and that 89 curve makes the card UNSTOPPABLE considering the space he creates for himself with the runs he makes and his sick finishing and composure stats.

80th+ minute and need a dagger goal? He is that card. (Will last the whole 90 minutes without any problem with his stamina.

(only played div rivals and weekend league with him, no offline or squad battles)

HEADERS (SURPRISED ME HOW GOOD HE IS SCORING HEADERS)

IF YOU ARE REALLY HARSH WITH THE CARD YOU CAN SAY HIS STRENGTH ISNT THE BEST IN FIFA (AGAINST THE VAN DIJK IF, ICON CB'S, AND THE OP CB'S) 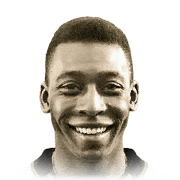 So last year i really wanted pele but decided to go with prime r9 instead and this year as you guys know as of now (10-11-2018) there is no Pele,cruyff R9 sbc. so i decided to try his middle 95 card and let me just start with, oh my god he plays like his stats. in 22 games he scored 55 goals all online. Hes fast and if you play the right ball to him its a goal. He is a great dribbler and great passer and shooter. i play str...
Read full review

THE KING OF FOOTBALL

Where to begin with this guy, waw.. Ok, so I was absurdly lucky this year with my pack rewards, I managed to pack almost everybody: Prime Inzaghi early on, Courtois early on (twice), UCL Bale, De Bruyne, and finally, a couple of weeks ago - the Big Man himself: Cristiano Ronaldo. Having played with CR7 in drafts a lot, I can say that Prime Raul is pretty much on par if not better than him and i decided to sell him and get 9...
Read full review

Sorry for my bad English.I was so lucky to pack him(Icon upgrade), and he is just one of the best players I have ever used. Pele has it all, no doubt about that. I personally think he is best as ST, and i think he fits perfect together with CR7. He is a player that makes it a lot more fun to play Fifa 19, and he has already played 63 games after 1 week. Pace: He is very fast, and he has no problem ...
Read full review
0
/600
Update my avatar Dos and don'ts
Top Rated
New
Controversial
Show comments