Packed IF Alex Sandro and Hazard was pissing me off, as Son was way better for me. I wanted an icon, and was split between Laudrup and Gerrard though they're very different players because Firmino and Eriksen in CM with Fabinho at CDM were very good going forward, but it was basically Fabinho defending by himself. Gerrard is a fucking revelation, honestly. 86 really really doesn't do him justice.

His base pace is obviously not going to get you anywhere, but adding a Shadow chem style brings him up to 82 pace and this paired with his 83 strength makes him very good when sprinting forward, holding off players like Nainggolan and even Casemiro.

Not much to say here. Doesn't miss those chances around the box, scores bangers for fun.

Honestly, crispest passing out of any player I've played with on this year's game, even with how fucked up gameplay can be.

He can do his thing in 1v1 situations, but don't expect to weave in and out of 5 defenders around the box like Neymar (though he can create enough space in those situations to get a shot or pass off). He feels more agile than the stat suggests, but is definitely the weakest aspect of his game.

With a Shadow chem style, he does not miss out on tackles if you time them properly. He is always positioned so well that you'll rarely be in awkward defensive situations with him. Even if you are, his defending with a Shadow is truly excellent.

He loses out in shoulder to shoulder situations with big guys like Fabinho, Pogba, and Milinkovic-Savic but can continue to break through on goal if these guys are chasing him. Otherwise, he will hold his own against most players in most situations. When going past CBs, he does not fly off the ball, and will still retain the strength to at least turn or get a pass off. However, his stamina can be problematic. Sometimes he manages to last the full 90, but other times he runs out of steam after 75-80 minutes. This with his agility are the only negative things I have to say.

In essence, the most well rounded midfielder I have played with. 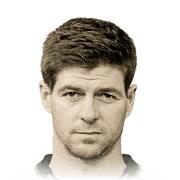 Baby Gerrard is exquisite, his passing, shooting, passing and his defensive traits are incredible. I highly recommend anyone who is thinking about buying a solid midfielder should definitely consider Gerrard. His passing feels so smooth and silky. I recommend a formation with wide players so he can deliver balls to the wings. I played him in CAM and he was very good. He's a very good goal score. He is the player that gets y...
Read full review

Gerrard is a very top player. I got him in a base icon pack for only 300k. At the beginning I thought that was a simple icon and that he was good but nothing else. I was so surprising with this guy, he so completely and he could plays in every position. It's true that his partner in the MCD is Rijkaard and that improve the level of Gerrard. I used him in CDM and with anchor.
Read full review
0
/600
Update my avatar Dos and don'ts
Top Rated
New
Controversial
Show comments