I consider myself to be fairly decent at this game, but after playing a horrific weekend with a meta side, I decided to switch some players around and go for a team similar to that of the 03-04 Arsenal Invincibles side. I began by using a 4-1-2-1-2 but quickly found Henry to be out of position and lacking to make the runs which he was known for. My sole purpose was to play like the Invincibles which I had seen dominate the premier league with their blistering pace and ability to execute in goal-scoring opportunities. And so i switched to the formation enclosed.

I noticed quickly that Henry felt and played exactly how I would have suspected. He finished everything that came his way in the box. If you could dream it, he would place it in. He didn't have a hard time breaking free from defenders either, the blistering pace allowed for him to time some brilliant runs that led to some lovely goals. These goals were refreshing as they weren't the usual first-timed finesse shots from outside the box. His ability off the ball really set him apart from the likes of Neymar, Mbappe, Griezmann, and other meta players I have used. He was exceptional, averaging nearly two goals per game and playing wonderfully in Div 5 rivals. Nothing short of excellent.

Shaping a side after a team that I watched growing up was a thrilling experience, and it has given me more hope for this game. It helped me realize that even players like Baby Henry can still be AMAZING if used correctly. This is a game based on creativity and personalization, and it was a great opportunity to try something completely different and enjoy my time while going through it.

Clunky on ball with slow gameplay. 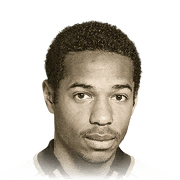 So I used this card In fifa 18 an wanted to try it again as a month or so ago I was struggling an had coins to purchase him.I was not disappointed I use him at Left Striker along side Icardi In game in a 4222, his positioning is outstanding, play a nice ball an he Is gonna get it in the back of net, timed finish shot? goal every time.His pace is extremely good he can out pace any defender when runni...
Read full review

Worth every coin this is the best resume of this review, this player is a monster, he is the best icon winger in the game.He has a exceptional pace with this 92 of Sprint, he can run away from the rival defences easily, he is very fast is one of his best abilities. In terms of shooting he is great...
Read full review

I always wanted to try an icon but i couldn't afford one. Few months ago i tried this baby icon version of Henry because i always loved him in real life and OMG WHERE DO I START? His finishing is Insane. It feels very buggy most of the time, I dont know why but even the red timed shots are just stupidly clean. His pace is great too but sometimes it doesn't...
Read full review
0
/600
Update my avatar Dos and don'ts
Top Rated
New
Controversial
Show comments