SO to begin with last year in FIFA 18 i also did the Rijkaard sbc and i wasn't dissapointed at all with this big boy. This year i said to myself let's do it again because i had a lot of untreadable players in my club. I played him with the Players in the linked squad. as a cm in 4-1-2-1-2 (2) and as a cdm with kante alongside with him. First i want to say: This guy is massive. if he goes shoulder to shoulder with almost anyone you can call the call yours. his interceptions are amazing and his heading ability is outstanding. he is very good with kante next to him to make that big boy small boy relation as 2 cdms. as a cm he can build up your play with very good passing abilities but he lacks a bit of shooting. sometimes his long shot and finesse shots go in but he is not a KDB or a pogba. coming to his pace: it is okay! he sometimes feels a bit slow but I am fine with that because this year you can catch anyone with normally pacy players. The dutch rock can go all game long and isn't tired at all. the dribbling is okay but you shouldn't go 1v5 with this boy.

all in all I think Rijkaard is a pretty good card. as a cm and a cdm, but if you wanna play him cdm I think a double cdm with a agile partner like kante is more suitable than a lone cdm Rijkaard. 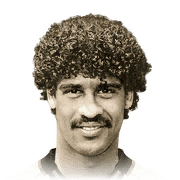 one of the best

sry for my bad english i am from germany. first of all i don't want to write a book about him so lets get in the analysis. His card looks mental but is it the same ingame? Pace: more than enough for a cdm although he is tallShooting: scored some bangers for me but you have to hit that green TF tho (heading also good)Passing: very good, like the stats on the card sayDribbling: good agility for his...
Read full review

Frank Rijkaard in my opinion is the best cdm of the game right after Patrick Vieira and i will explain why.I have always played in a classic 4231 formation before the finesse patch and i played kante and rijkaard as the two cdms. At first i was not so happy about him, he felt slow, with poor agility and not so defensevly effective. When i switched to a 41212 formation i had to sell kante and keep rijkaard as the only...
Read full review

Brought Rijkaard to bolster my midfield. I played him in a 41212 CDM and 4231 narrow CDM, and he did exactly what I brought him for.Broke up the play, intercepted everything, great composure when in possession and good passing. His agility and balance are bit low, but I for a CDM he is perfect for my squad. If you have the coins and are looking for a very good CDM.I recommend Rijkaard because you won't ...
Read full review
0
/600
Update my avatar Dos and don'ts
Top Rated
New
Controversial
Show comments