Bought Pogba a week ago and he is an absolute beast just as expected. He is almost perfect as a CM or as a CAM, I think that using him as a CDM could work well but in my opinion it would be just wasting his attacking qualities. He is strong as hell, solid in the air, has a terrific shooting, doesn't miss a pass, dribbles as if he has 95 agility... Really complete and pretty recomendable to everybody that can afford him. Just give him a try, you won't regret it. 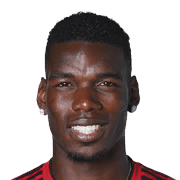 Paul Pogba - What. A. Player. He is a complete midfielder and an absolute work horse. He can play well in any position, whether it be CDM, CM, CAM or even CF with the right chem style. His Physicality, Passing and Dribbling are definitely his strengths. He can hold play up well, ping a pass from anywhere, and thanks to his strength and...
Read full review

Where to start... This card is outstanding! I was lucky enough to pack him out my div rivals rewards. The first thing you'll notice is his presence in the team I started off playing him as a CDM in a 4-2-3-1 just because it was all I had the players for at the time he was great there but I do feel he is more of a pure CM or even a CAMI have switched to a 4-1-2-1-2 (2) with Pogba as the RCM and he does a great job both defen...
Read full review

So i decided to pick up inform Pogba because i sniped one 100K under his value, so why not use him for a few games to test him out? I used him as a CM with just a basic chemistry style. My first impressions were very good. He wins every possible header, his physical is out of this world, and has a great passing and dribbling combo. For me he was an absolute game changer. Finesse shots from outside the box were no pro...
Read full review
0
/600
Click here to verify your account in order to comment Update my avatar Dos and don'ts
Top Rated
New
Controversial
Show comments