So I had grown tired of Mahrez and I was looking for a new Premier League RM to link with Trippier on the right side of the field. Enter Jahanbakhsh, part of the first wave of MOTMs to be part of FIFA. In my opinion, 17k for a player of such high quality is an absolute bargain. I noticed that his passing stat was a bit underwhelming, considering that he is a midfielder more than capable of picking out a pass from what I have observed of him. I put a Maestro chemistry style on him, but I found this to have a disappointing result as I tend to play on the wings and cross the ball into the box, and his crossing was not affected by the chemistry boost. I pretty much immediately switched to a Catalyst style, and it is more than enough to say that Jahanbakhsh is now a beast on the ball. Here are overviews of his 6 stats:

-Pace: Blink and you'll miss him. 96 pace is absolutely perfect for my playing style: trying to get past a defender usually ends up in either him getting fouled or leaving the defender in his dust. This also affects him off the ball as well; he is always making perfectly timed runs for Payet or Trippier to play into him.

-Dribbling: 85 Dribbling is more than enough to quickly change direction, jink past an unsuspecting LB or make a mazy dribble into the box. Also, 4* skill moves means I can roulette past any defender with ease.

-Shooting: This attribute of Jahanbakhsh's play is greatly underrated. He can finesse it past the goalkeeper from 12 yards, bang a long shot into the top corner from 25, hit volleys with regular success, and nestle headers into the side netting from corners. His 90 Shot Power is insane: if you want a corner, just smack it at the goal - the keeper won't be able to catch it. Also, his 4* WF means he is capable of taking shots with either foot well. I feel like his shooting should be at least an 85, rather than a lowly 82.

-Defending: 46 Defending doesn't really matter on a RM, but his high defensive work rate means he always tracks back.

-Passing: Like his shooting, I feel that Jahanbakhsh's passing has been very underrated by FIFA. As I have previously stated, I thought his passing wouldn't be the greatest, but I was clearly tricked into thinking this. He can play 1-2s with other players, make pinpoint crosses into the box, or switch the play to Marco Asensio over on the left. In my view, passing is Jahanbakhsh's strong point. However, his stat doesn't reflect this, and I feel like his passing should be an 86 or above.

-Physicality: Aside from defending, the only stat that Jahanbakhsh isn't extremely good at is physicality. I wouldn't say that he always gets muscled off the ball, but i wouldn't say it never happens either. 83 Stamina may not be enough for a full match, especially if he is already at lower than 85 Fitness.

Overall, I would recommend this card to anyone who is looking for a fresh new face in their team, or to anyone that wants to flex on their friends with this nice looking special card (also love the card art btw, and admittedly it was one of the deciding factors in the decision of whether to buy him or not). 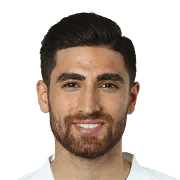