At first, I didn´t think he was worth it and I doubted about making the Premier League SBCs or not. I did them all anyways because I had opened a lot of Premier League upgrades and I had so many untreadeable players, so he barely costed me about 150k.

Now that I have used his card for more than 30 matches (most of them in FutChampions), I can say he is an absolute beast. He is more or less like Kanté (his defensive stats are completely OP, and you can see that in the field: he is a ball magnet and a defensive animal), with quite good shoot stats. Although his shoot is really powerfull and quite accurate, it is good to say his finesse shots suck, and you can´t expect him scoring incredible goals: use him as an attack reinforcement when you are close to score or need to score really quickly. Obviously, his left foot is almost useless.)

Finally, I have to say I loved his passing, being really consistently and accurate (he almost doesn´t fail any passes at all).

Interceptions (the best atribute of this card and the main reason why you need to have it in your scuad).

Stamina (he doesn´t get tired at all and runs troughout all the game and added minutes or extension).

Passing (he gives really good passes, as I said before).

Defense (he is always well positioned and defend like he was Kanté).

Pace (although he isn´t that slow, Shadow chemistry stile gives him more acceleration and speed).

Price (although I don´t think he doesn´t worth the coins you spend on the PL SBC, I think it is a little bit expensive for the packs you get from it and the overall rewards [270k at this moment]). 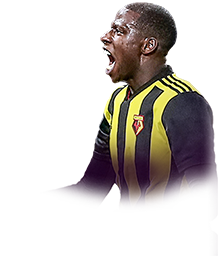 A machine of a CDM

I invested in the Premier League SBC around a month ago with all the players in my club so that I could do the SBC as soon as it came out. I took Doucoure over Vardy because he can just replace Kante in my team. I play him CDM in 4-2-3-1 formation so as you can see by his stats for me, he doesn't get involved in many goals. I also keep him on 'stay back while attacking.'When it comes to defending, this guy is ...
Read full review

I made this review as soon as I could to give anyone debating wether to get him or not a few insights into him. He plays right cdm with futmas Torreira at left cdm. His H/M work rates are not an issue at all, I used Casemiro before hand (both on stay back) and they stay same position each. He is sometimes at the edge of the box for a follow up but is yet to score from me, although as he has such high shot power, all of his ...
Read full review

Abdoulaye Doucouré: WHAT A PLAYER!In my opinion he's one of the best CDM's in the game, because of his strength and controlling abilities. I think too many people underestimate this mans importance in a team and if I compare him to players like Fabinho and Kanté I can only say he's just better. Fabinho has a great card and defensively he might be almost as good, but Doucouré outclasses him in all the other ...
Read full review
0
/600
Update my avatar Dos and don'ts
Top Rated
New
Controversial
Show comments