Baggio was my favourite player from my childhood, i watched the 1990, 1994 and 1998 World Cups, and then i liked this ultraC player. His dribbling, his vision and huge ability of playmaking forced me to be fan of Italy. So, in FIFA his abilities is on, especially dribbling and passing... oohh his through passes, he can accuratly send a through ball even by the half a pitch. Some words about his freekicks, just aim two fingers off the post and after shot get stick left, the ball will accuratly fly in high corner of the net, i scored lot of such goals. Before him i used De Bruyne, also nice player, but far to Baggio, Baggio is more controlleable and accurate.

-Stamina, should be substituted after 80 minutes 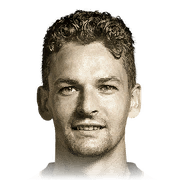