I wanted to try out an icon striker for around 400 to 500k to go up top with my Mbappé in a 41212(2). I was torn between 3 icons that I wanted to buy, middle Lineker, Baby Shevchenko and of course middle Hernandez. I actually first bought Lineker who was alright but not really what I expected given his stats. I had previously used Hernandez's baby and legend cards on Fifa 17 and Fifa 18 and really enjoyed them both so I was intrigued to see how this one would play in this Fifa. And let me tell you he did not disappoint! Everything about his game, the pace was unreal, finishing was out of this world, his heading and jumping were also great, considering he's 5 foot 9. Overall I would 100% recommend this card for anyone that is struggling to get goals and wants a fast but also clinical striker!

Expensive (Depending on your budget)

Stamina (In extra it may be a problem for some people)

Height (Jumping makes up for it)

Passing can be pretty bad at times 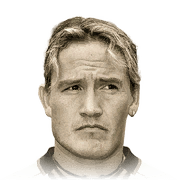 So... this guy is an absolute goal machine. I bought him for like 300K and he is destroying opposing defensive lines. His shot in unbelieveble, I have hunter on him and he does bits for me, I think he has more goals than games played for me (which is like 105 games and 115 goals), if you are looking for a cheap icon striker this is your guy, I can't say I've tried a better striker than him.
Read full review
0
/600
Update my avatar Dos and don'ts
Top Rated
New
Controversial
Show comments