Hello guys! Today I want to review prime Nesta. I start from stats. As you can see he have not as good as other defenders with overall like him. There are a lot of cb better in stats with less overall but in game he's like a God of defence. His agility and ballance are very bad but u cannot feel it in game he isn't heavy for me. You can trust me this one is best what you can choose. I play with Ramos, Varane, VVD, Desailly prime history, De Ligt and much more good like them and I can tell Nesta is best. His positioning is very good. He is allways in good place in good time blocked many shots on target. I was trying him playing against legends like Raul, Crespo, Ronaldo and with most dangerous players like CR. He clean almost everyting. He often wins headers with CR. For me his jumping and heading improved me. This player change my defensive into better line.

P.S. sorry for my mistakes but I'm not perfect. Thanks for reading.

So as i said before his pros are:

Positioning - He's allways in good place. He never break the line of my defend and allways stay in the middle. 10/10

Work rates - I like Cb which are allways at back and he's there all time and he's like that.

Sliding tacle - His tacles are incredible 9 of 10 are on ball and cleans opposite. 9/10

Jumping and Heading - As i took before he wins headers with Ronaldo and Ibrahimovic which have best that point in the game. In offensive he shoot for me 2 goals from corners so it isn't bad for central back 9,5/10

Marking - Trust me if you want dribble him better to pass ball to someone else. I don't recommend to get close to him. 10/10

Agility and Balance - As i said before this stats on paper looks ulgy but in game you wouldn't feel that. I will give him 75 for the both stats if i have to be impartial.

Strenght - This is last one pros of him. He easily beat Ronaldo. He often get enemy down with his strenght. 9/10

On the cons i can put:

Pace - but a little. He's fast enought for me but in some situation he can be too slow to catch up someone.

Sometimes he's doing stupid mistakes like other CB in the box but it is very rarely.

I think it's all cons for this card. 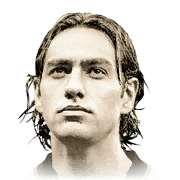 As the title goes - I am unsure of what the verdict may come out with this one. I'm close to 200 games with him and I'm thinking on better alternatives already. Bought him for 850k and hopefully, I will be able to sell him for about the same price. So I'll just lose the EA tax...The defending capabilities are very good and amongst that, the heading is top notch. Whenever there's a crossing coming in from the opponent...
Read full review
0
/600
Update my avatar Dos and don'ts
Top Rated
New
Controversial
Show comments