I stuggled wondering what attacking player i could get for around 500k and bergkamp stuck out, i use him as a striker in a 4-2-3-1 most of the time and he is phenomenal by far the best player i have used all year, in 32 games for me he has 51 goals and 15 assists. When in front of goal he will not miss, he has amazing tap in animations and is always composed his shots feel like they have a bit of weight behind them and always soar top bin his finishing is incredible i thought he might be a bit slow but with a hunter he has good pace for a striker fast enough to get past the Defense when making a run but might get caught on a breakaway but then again so does every player. He also has a chip shot trait which is amazing his chips are so quick and accurate and it helps his lob passes aswell his volleys are also insane they get smashed with crazy power then dip down if hit right, but the most surprising thing to me was his passing and positioning his passing is insanely accurate and his through balls are always perfectly weighted very good quick link up play aswell and makes the perfect run almost every time his positioning really sticks out to me he is always making great runs and either getting through on goal or setting others up. in terms of cons id say his stamina and jumping aswell as balance and agility are his main cons he doesnt feel stiff on the ball and can still turn well but in bad gameplay he can feel sluggish and while he doesn't seem to run out of stamina until extra time you do notice he slows down a tiny bit towards the end of the game however his physical isnt all that bad he can hold players off the ball surprisingly well and feels solid. Bergkamp is what you expect an icon to be he is solid all around and just has that icon feel to him i can always rely on him to get me a goal when i need it.

Stamina towards the end of the game

agility and balance at times 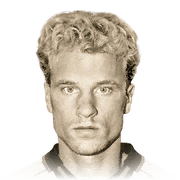