Hi there, after writing a rewiew on baby Seedorf 85 I was impatient to try out this prime version and write down my impressions on one of my favourite players. So let's begin

I try to go through and explain: if you spend 600/700k coins for a player you may expect a game charger or, if you're a casual player like me, you may expect to enjoy the player in the game. The model of Seedorf is well done, his stocky body will let you feel his presence on the field, and the baldhead is my favourite version among the other. I reminds me the seasons on his prime at AC Milan (I'm a fan), the "prefect game" against MU in 2007, the sceams of an Italian journalist that called him "Willy Wonka Willy Wonka, the King of Chocolate" after his volley...well the feelings in game are very good, and the old memories will come.

not rapid but fast enough, I played his as left central midfielder in a 4 1 2 1 2 narrow formation. He is not so dinamic as the baby version, the MM workrates are more correct for the "old" version of Clarence and you may feel the presence on the field only in a limited area. I was amazed by the 85 version because he runs all over the pitch, both in the attacking third and defending third. Prime Seedorf is static compared with the younger one. More technical, but static. And this is the reason why stamina is not an issue.

Just impressive. Scores bangers, volleys, takes free kicks and corners. His passing is pure joy. In one word: dangerous. BUT... I cannot feel so many differences compared with the baby version. Again, slightly better, not so much better

BUY HIM if you are a fan, and you need a skillful player that can hold the field and create hazards on the attacking third. He's a CAM or a CM with no defensive tasks. Use the right instructions (go forward, moderate the intercepions) and you'll be amazed.

DO NOT BUY if you search for a game changer, he's an excellent player but on the same level of the baby version that will cost you 300k less. He CANNOT hold alone the midfield, he's not a defensive median, he's not a winger. Using him in a 4 2 3 1 formation as CDM could be disappointing due the workrates and lacking of strong defensive skills.

Workrates (if you're looking for a dynamic box-to-box player) 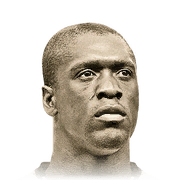 Where do I start ...Seedorf was my first Icon I bought, although I was not sure to go for, eventually by just looking at his stats in general he convinced me.I am playing seedorf CAM, where he should be used!Starting by his pace, sinds it's not a winger nor a pacey striker, his 80 pace doesn't seem to have any problem with running at all.His shooting is crazy, I mean, 91 shot power an...
Read full review
0
/600
Update my avatar Dos and don'ts
Top Rated
New
Controversial
Show comments