So I played about 12 games of FUT Champs this weekend as I was busy and I got a few wins. I had a look at the TOTW and saw their weren't many great cards under 84 rated other than Gayle. So when I got him from my rewards I was relatively happy.

So I already had Lineker's prime in my squad so I knew I could link him into my squad quite easily. I played Gayle up top along side Lineker in a 41212(2). In 5 games he scored 6 goals and grabbed an assist proving that his passing wasn't a huge issue. I played him in with a hawk and he felt very fast and his shooting felt very good. (I've used Musa SBC) Overall he was quite fun too use, his passing wasn't awful, shooting and pace good, dribbling solid and he also scored a header for me.

So all in all a pretty good card but with TOTS just around the corner he won't be very usable for long so try him out while you can! 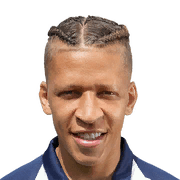