I am very happy to have picked this card up as a major upgrade for my 90 Keane. Firstly tackling is a major issue on this game with the mechanics being broken in the favour of attackers so any CDM is going to have frustrating moments but that’s EA’s fault, my 90 Keane with backbone should have been a machine in 50/50’s but was still losing out so I decided that I might as well get a CDM who can go forward which Keane was appalling at. Petit is a great option, he has high/high workrates so he appears all over the pitch and with amazing stamina goes all game – he pops up to make a difference for you in attacking and defensive situations. This is mainly a good thing and he’s scored a few for me from runs into the box although he can get himself too far forward which can be an issue on the counter, however I think the goals/assists are a decent trade off. If you play a formation where you want your CDM not to go forward then don’t go for Petit as he loves to attack but if you are fine with him getting forward then go for him. He’s tall, aggressive and strong with great standing tackle and interception so he breaks up play excellently. I have scored quite a few goals where he has broken attacks up and charged forward to get my team into attacking positons. Long shots and shot power are a great bonus as well, I don’t shoot that much from long range but he scored and absolute worldy to win me my last WL game so it’s nice to have. His vision is low but short passing is great and I don’t play long ball with him so I haven’t noticed anything negative with his passing, I also use engine to up this as pace isn’t great nor is balance or agility. A lot of people seem to have shadow/anchor on him but I think his base defensive stats are strong enough anyway and for me engine makes him a bit smoother on the ball and more usable to hassle and chase opponents. He’s a fantastic box to box midfielder who is better at the defensive side so for me in a 4-2-3-1 knowing he will get forward a lot he’s excellent. 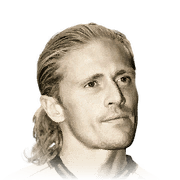 One of the best CDM's

I've was lucky enough to pack Petit quite early of fifa 19. Fortunately he was untradeable, which meant I had to use him (Otherwise I would have sold him). Now I have played 415 games with him and I absolutely love him. He is incredible strong and really good at tackling. All in all his defensive stats are exceptionel for a defensive midfielder. But the thing that really stands out for me is his longshots! His got a crazy l...
Read full review
0
/600
Update my avatar Dos and don'ts
Top Rated
New
Controversial
Show comments