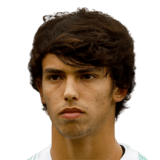 Joao Felix is an incredible player. I packed him yesterday on the Liga NOS tots pack, and got impressed by his game. He is fast, agile and has an incredible definition, shot power and effect(22 goals in 10 games). Although he only has 53 strength, his 91 balance helps him a lot. His passing is also quite impressive, and the best of all is his stamina (99). He can be running all the game and he won't get tired, it is amazing...
Read full review

Where do i start. I got him from my red player picks on Thursday and i have used him with Bruno Fernandes ever since i got him. He is incredibly agile which results in him being extremely fast when it comes to getting in behind and past the defenders. His finishing is outstanding on his left right foot and occasionally scores a goal on his left. The big reason his finishing is this good is because of the power he gets behin...
Read full review

at first i wasn't expecting much from this card, however after using him for a few games with 86 MOTM Marega, i soon discovered that he is a hidden gem. playing 21 games with him i have scored 22 goals and have 5 assists. i also thought that the 3 star weak foot would be an issue but most of the goals he has scored have been with is left foot. i would definitely recommend using him if you have the chance!
Read full review
0
/600
Update my avatar Dos and don'ts
Top Rated
New
Controversial
Show comments